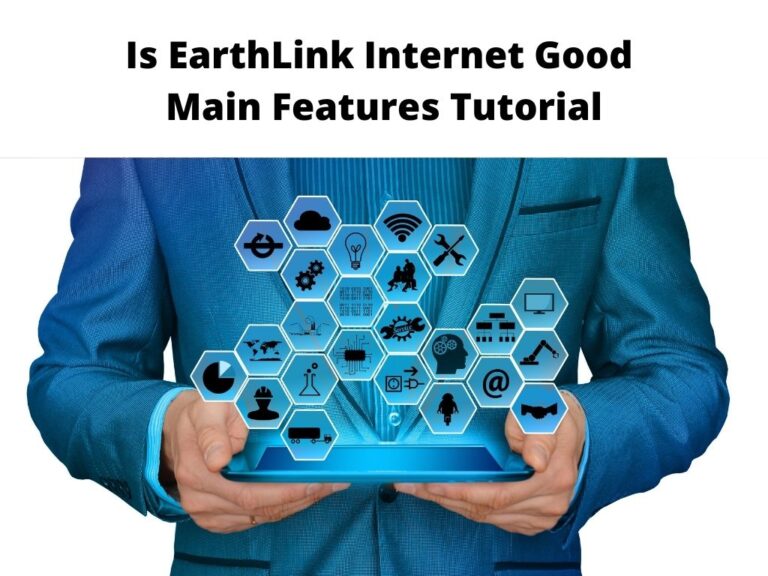 For potential subscribers asking if EarthLink internet good, read to find out what makes the service unique. In recent times, one of the required amenities needed in every home is reliable and fast internet. This is because a good number of people now work from home, meaning a network that can serve your needs remains a priority.

In short, the majority of people depend on the internet be they use both cables and telephone companies. Most of the brands that offer reliable internet services require a lengthy contract and their rates keep increasing when at the end of your promotional offer. People simples need a reliable network that won’t break their pocket. Having said this, where can people now turn to without spending much monthly? Let’s take a look at EarthLink’s internet.

People that used the internet during the 90s will know about EarthLink because they’re one of the major brands during the “dot com boom” that happened during that period. generally, EarthLink internet makes use of fiber connections across up to 28,000 miles. Their internet service is both for residential and commercial use.

The DSL is the internet type that transmits its data through a telephone network and the speed it offers is faster when compared to a dial-up connection. For EarthLink, their emphasis is on the provision of DSL internet plans with speeds starting from 3 Mbps. The service comprises both DSL and ADSL.

EarthLink’s internet is in three categories:

These are standard plans, pricing, and speed being offered by EarthLink. However, the speed still differs depending on your location. Furthermore, there are starter prices that can last for an entire three months until your contract ends.

When it comes to entry-level broadband, they top the chart when it comes to saving costs. For those on a tight budget because of other responsibilities, Earth has good alternatives for you. Their download speed has continued to increase which makes their service admirable.

Not everyone is heavy data users. In as much as gaming online and movies, streaming is the trending thing, there is still a population with light internet use.

So, if you need the internet to send important emails, shop online, read news online, or do internet banking, you don’t need a heavy data subscription. In other words, the DSL package by EarthLink is ideal if you want the flexibility of extra capacity and Wi-Fi connection.

Every internet plan offered by EarthLink has a wide range of connections. They’ve cable, satellite, dial-up, fiber-optics, and DSL options. This is achievable because they partner with other ISPs.

These internet types have their pros and cons, so your choice will depend on your internet needs and your location. For instance, if you’re residing around a rural area, where dial-up service is scarce, a satellite internet option might be your best bet.

Apart from the internet plans, you’ll also enjoy other helpful extras without paying any additional money. For instance, you’ll get to receive eight free full-service email addresses and about ten anonymous ones.

These emails are important especially when you need an email address for a business but don’t want to receive further spam mails after the deal. There is also spam and virus protection that will prevent your computer get getting any obnoxious messages.

In as much as customers still have the option to select their preferred internet type, you can’t be guaranteed high-speed internet. This is because the speed is varied based on your location. The same applies to the upload speed. So, it’s important to get the speed range in your area before you subscribe.

The plan is not transparent

Unless you’ve access to contact EarthLink directly, it’s quite challenging to determine if your location can benefit from a certain plan. This information can’t be found on their website.

The high-speed range is limited

You might be lucky to access the EarthLink DSL plan in your area but the fiber-optic internet which is the fastest is limited to some areas.

Judging it holistically, EarthLink is not a bad provider because many of their subscribers are satisfied with the service, they receive but they’re yet to up their game to match the major providers. However, most of their plans can be compared with other ISPs. Most importantly, their poor customer support puts them at a disadvantage position.

How good is EarthLink’s Internet service?

As a subscriber, you’ll enjoy different internet speeds but that will depend on your location. Al their internet plans have the required speed for each purpose. From online gaming to casual web browsing.

Is EarthLink more reliable than AT&T?

The fact is that EarthLink’s internet speeds are comparable to AT&T with no real surprise as per the bills. Though their internet monthly payment is more than AT&T, they’ve got a lower rental fee on their fees, and their installation fees are also affordable. Most importantly, their bills do not fluctuate even at the expiration of a promo.

How fast and reliable are the internet plans offered by EarthLink?

EarthLink offers a download speed of up to 75Mbps and it’s offered through a cable connection. The satellite speed is 25Mbps and DSL has a speed of 15Mbps.