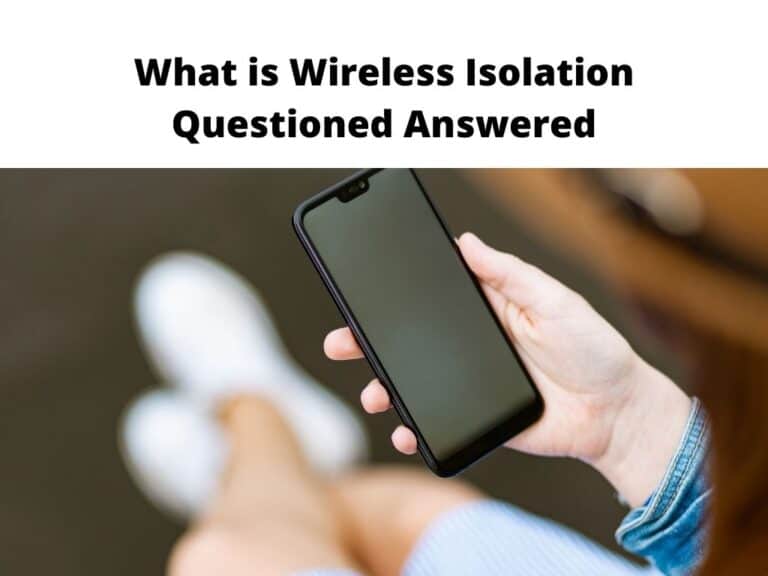 What is Wireless Isolation – Questioned Answered

Wi-Fi is everywhere regardless of the place, either in a coffee shop, in a bus or even a restaurant. It is, therefore a decision made by the owners to provide free Wi-Fi to their customers’. However, they have to ensure that they separate Wi-Fi guests from their local networks.

This comes as security features that help to prevent wireless clients from communicating with each other. It is mainly useful for guests and BYOD SSIDs. It helps add a security level that assists in limiting attacks and threats from any connected wireless device.

This is a proven method to stop any unwanted visitors from accessing any of the computers or available resources. Therefore, without any wireless isolation, anyone on a wireless internet connection can have full access to the company’s or business computers and the various wireless devices that have been using the Wi-Fi hotspot at the time.

Most wireless routers support wireless Isolation in various forms. Once you get your router, you can access the product manual. Alternatively, you can log in in your router and check the security tab.

Should I enable wireless Isolation?

Yes, this is absolutely necessary and important for the safety of your communications. Once you activate the same feature, it helps avoid unnecessary hacking from other users who might want to communicate with each other as well a block their communications. For instance, if you have many guests who use connect to your Wi-Fi network, then you should absolutely have it in place.

How to enable Wireless Isolation

According to many routers and other features, this option is available on the router’s interface for the ones that offer it. However, if you cannot find it on your router, you might use older versions and not the current ones.

The option originates under the advanced wireless Setting. For instance, it is found under Wireless> Advanced Wireless setting>AP Isolation in some Linksys routers. On other routers, the option is found on the main wireless setting page. It can be found under wireless Setting>Wireless Isolation. For different manufactures have a reference to the same feature and it generally has “isolation” in the name.

However, one should remember that once you activate the function, it leads to some of the features not functioning. For instance, Chromecast is prevented from functioning. This is because Chromecast needs to communicate with other devices on the Wi-Fi network, and wireless Isolation blocks them all.

What is SSID wireless Isolation?

This feature helps prevent computers on different SSID but on the same network from seeing each other. For instance, if there is no sharing of files, it would be a nice idea to enable the same. In case of home networking, SSID isolation, you can separate the Guest SSID from the main SSID. Client isolation will help you prevent yourself from accessing the kids’ computer and vice versa.

Should I care about wireless Isolation?

It’s a common thing and wonderful in that case to own a router. Sometimes the internet is slow, and we get angry when they fail us. We should get concerned about wireless Isolation. This is because of some things, such as everyone being able to access or connect and snoop around on your private information on the shared folders. Though it might not be a concern for everyone, some are determined to hack your computer.

They might be determined to explore other devices such as cameras and private computer information. Therefore it is essential to prevent your network from such malicious access from those that may want to snoop around and access your information. Wireless Isolation is the best way to go and goes a long way in saving you from hackers as well as intruders whose motive you might t may take you by surprise.

How to add wireless Isolation on your router

If you come to a point where you realize that your router has no feature of wireless Isolation, then that should not worry you. Some cheaper routers may not have such features. Therefore an upgrade will go a long way in improving your router.

The firmware upgrade is your solution for such case. There is a Linux based project that has been created to replace a router manufacturer’s default firmware. This is one by modifying your existing router with DD-WRT open-source firmware, enabling the functionality of your router to go overboard.

This feature generally gives you two separate Wi-Fi access points, namely a primary secure one for yourself and an isolated one or your guests. Therefore, on such wireless isolation, guests can access the internet as guests and are totally confined to this network that operates entirely separate. Though they have access, they cannot be able to the main network One is also able to set separate rules and restrictions on the guest network. For instance, you can disable the guest network between several hours though leaving it accessible to the other users. This gives you ultimate control over the internet.

A piece of major and possible advice, especially to owners of restaurants, coffee shops, buses, or any form of bossiness, is to have the wireless isolation feature affected. This proves to be a very protective and secure means to avoid any intrusion or sabotage from third party users. One has the confidence of privacy at all your materials are safely stored and cannot be accessed. Wireless Isolation will also help one have full control of the internet and limit the c9ontetnt and number of users accessing the same. Therefore, one can only avail and share the information that is required or necessary to other connected users