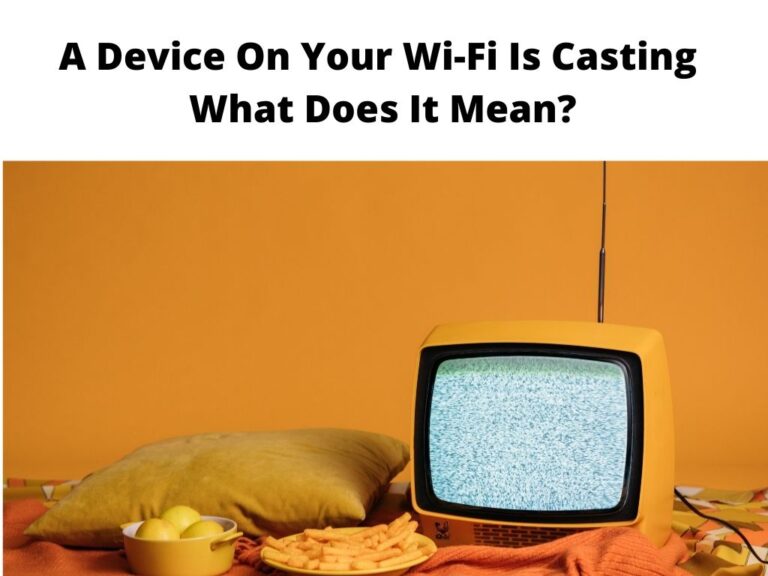 If you recently discovered that a device on your Wi-Fi is casting, read on to find out how to handle it.

Over time, the majority of people prefer using Chromecast to stream content to their HDTV. This is because it can comfortably work on most of the apps but the annoying part is that you’ll continue to receive a constant notification.

On the other hand, any device connected to your Wi-Fi and its casting can be frustrating as well. The notification will keep popping controllably each day. Many users have been frustrated about this, that where this write-up comes in handy.

A device on your Wi-Fi is casting explained

Whenever this notification starts popping up at the point of casting any content directly to your TV it will become problematic.

For users who don’t know, Google recently introduced the Android update that permits users on identical wireless connections to view what is being cast to the television.

The users will automatically get an update which will start controlling the cast. The feature can still be turned off but you’ve to toggle off the ‘let other users control the casting media’.

This is an option seen on the Google Home app. A good number of Android televisions have this built-in feature.

With this, it’s easy for it to function as Chromecast. However, this cannot be compared to native TV apps because they offer a better experience.

In addition to the better experience being offered by the native apps, users will still get notifications when Chromecast is used.

Sometimes, the notification will be seen directly on the Android television even if the app was just opened.

Also, it will still be seen on Android phones once the Wi-Fi network is the same. It’s actually beneficial to some and frustrating to others because it’s seen as not necessary.

Most times, this notification is seen on the television especially on Nvidia Shield television but that does not mean that it does not appear on Android devices.

Google on their path has notified all users that the constant notification wasn’t intended and they’re setting up modalities to rectify it.

What you can do is just disable the notification but be aware that Nest Home, Android TV, and Chromecast devices will be affected. Google has launched to fix and it will be installed automatically for some users.

The Aim of the Notification

As technologies keep advancing, the entire Google Chromecast has not been left out in this growth. In short, they continue to launch innovative hardware together with other latest apps.

This has been the driving force of many users to Chromecast setup. However, there are still other devices that make the integration of these devices seamless.

This makes the user experience to be streamlined and Google has also been trying to adjust the casting control across diverse Chromecast devices.

They’re able to accomplish this by including notification for casting on their system. With this, it will be easier for users to control more than one Chromecast stream using their phones.

This notification will certainly pile up when different television is used on Chromecast. The resultant effect is that the phone being used will have numerous notifications.

Even when the notification is cleared up by the user, the streaming will still be ended by the device in the Wi-Fi network. Because many users are connected to it, there is every tendency it will occur multiple times.

How to switch the notification off?

Firstly, you need to switch off the Chromecast ability to control devices, if you intend to stop the device on your Wi-Fi from casting. To do this, the Google Home app can be used.

How to disable Chromecast Notifications on any device?

This is another option that can be used to switch off the notification. You can accomplish this by either doing so on a specific Android device that receives the notification and is connected to the Wi-Fi network.

Once you’re now familiar with the Android devices, follow these steps;

If after all these and you still receive the notification, it’s obvious there are intruders on your Wi-Fi network.

How do I stop a device that is casting on my Wi-Fi?

What can I do to prevent my phone from casting?

Navigate to Settings, locate ‘Google’, tap on Cast Media Controls, then turn it off.

What does casting to a device actually means?

This procedure will enable you to mirror your Android device to your television. With this, you can enjoy the content on a bigger screen.

Can I stop my mobile device from casting to other devices?

PrevPreviousComcast – Two Modems In One House – Is It Feasible?
NextAboCom On My Network – What Is It And How To Fix It (Guide)Next
Facebook Twitter