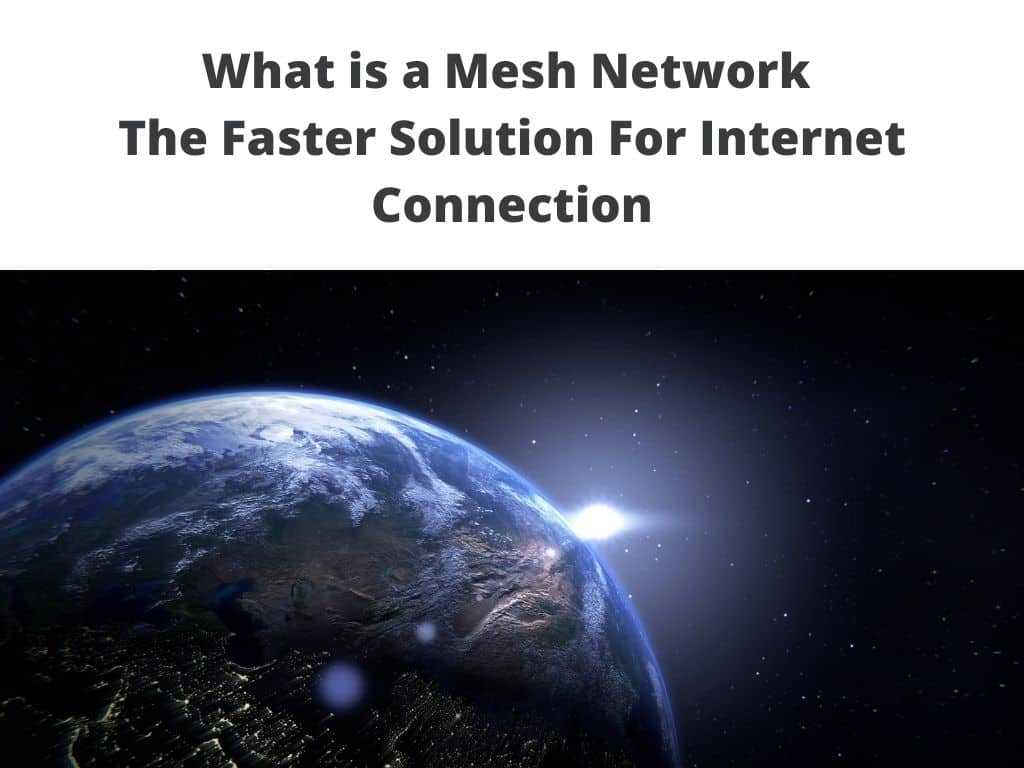 What is a Mesh Network – The Faster Solution For Internet Connection

For some time now, mesh network has been in use mostly in hospitals, military and for any large commercial-scale applications. The network functions with any radio signal, and different devices can be piggybacked upon each other, which serves as nodes in a network. Each of these nodes will, in turn, help to spread the radio signal further that the last one.

Mesh functions the same way as a wireless router. In other words, they’re small radio transmitters that utilize usual Wi-Fi standards referred to as 802.11a, b and g. These enable it to communicate with users and each other wirelessly. Furthermore, these nodes are programmed with software that typically informs them of the proper way to interact with a more extensive network. This programmed software enables information to seamlessly travel from point A to B by choosing the safest and quickest path. This process is denoted as dynamic routing.

What Is Mesh Network Technology

Mesh Network can also be referred to as mesh net, which is an infrastructure made up some nodes connected to each other. This mesh individually comprises of three main components, namely: Gateway, Repeater and Endpoint.

Gateway – This is the backhaul to the internet. Because of the need to directly interact external of the mesh network, the gateways have extra connectivity further than the mesh.

Repeaters – These are devices that their responsibility is to repeat all the messages being gathered directly to the endpoint. It is also referred to as the mainstay of any mesh network whose job is to keep forwarding messages to the endpoints which cut across all the network infrastructure. These, in turn, ensures that nodes that are separated from the gateway, are furnished with the required information needed to function. Because of the significant role of the repeaters to the mesh network infrastructure, they’re designed not to ever to sleep.

Endpoints – Among all the devices in a mesh network, this remains the only one that has no responsibilities. Their duty is just to receive all the necessary data sent from the repeaters without having to return any of them. This means that their services are not needed at all times. This makes them an ideal choice when it comes to choosing an IoT-connected device such as a battery sensor.

You might want to know that a mesh network does not resemble a typical traditional setup that comprises of a range extender and a router. It is designed as an internal antenna. This makes it possible to be kept in an open area instead of under a desk or a closet. It blends in with the décor in your home without any flashing LED lights or indicators. It has just one LAN port which is used for connecting devices such as game console, T, etc. A feature you’ll rarely see in it is a USB port.

Furthermore, these mesh networks are multi-bands devices which makes them to function on a 2.4GHz & 5GHz radio bands. All these functions on an 802.11ac wireless technology. Some models of the mesh network provide support for MU-MIMO technology (Multi-User – Multiple Input Multiple Output). The importance of this technology is that it streams data to more than one wireless clients that are compatible at the same time and not in sequence.

The system also makes use of band steering which selects the least-crowded radio band automatically. This is for possible best performance. There is also an easy to use guest networking, parental control, together with an option for device prioritization. Apart from the system designed to be easily used, you can also configure the wireless security setting and port forwarding. The only challenge is that it lacks an option for advance network management such as firewall settings, band control, wireless transmission settings which are preconfigured in a traditional router. Another thing is that it cannot make use of a third-party WRT firmware to customize the system for network monitoring and an overall performance enhancement.

The methodology of how Mesh Network works

With the help of a mesh network, you can efficiently connect an entire city wirelessly using inexpensive existing technology. Typically, traditional networks depend on a smaller number of wireless hotspots or wired access points to connect to many users. With a mess network, the network is seamlessly spread across numerous wireless mesh nodes. These nodes communicate with each other, which makes it easier to share the network connection over a larger area. In fact, a mesh system is genuinely wireless when compared to fixed wireless or wired network. This is one of its major advantages and not a traditional wireless access point that needs to be wired for the signal to be broadcasted. For an extensive wireless network in public areas, the Ethernet cables need to be buried in walls and ceilings.

When a mesh network is installed and the wireless node connected directly to a router, it will be easier for the internet to be shared across the closet network nodes. This continues until all the networks are fully connected. This reduces the money and time which is generally spent in installation and infrastructure maintenance. Furthermore, mesh networks also play a significant role in the extension of wireless range and improvement of connectivity for the majority of IoT projects, especially those which can’t be supported by Bluetooth or Wi-Fi.

What is the meaning of Mesh Network?

This is a group of devices directly acts as a single Wi-Fi network. This simply means that you’ll be making use of numerous sources of Wi-Fi around your house and not just a single router.

Is it preferable to use mesh Wi-Fi?

Mesh Wi-Fi networks function the same way as an extender or router. The difference is that it works smarter, which makes it a lot preferable. Furthermore, their design is a lot better when compared to a traditional router. This makes it easy to be kept in the closet or an open area that muffles Wi-Fi signals.

What distinguishes a mesh network from a Wi-Fi extender?

An extender can be added to an existing Wi-Fi network while the mesh network usually completes for a regular Wi-Fi. Ideally, they’re designed to replace any complicated extender and router with multiple units that are typically placed around the house.