Home / cell / What is Sprint Hub – How To Remove Bloatware 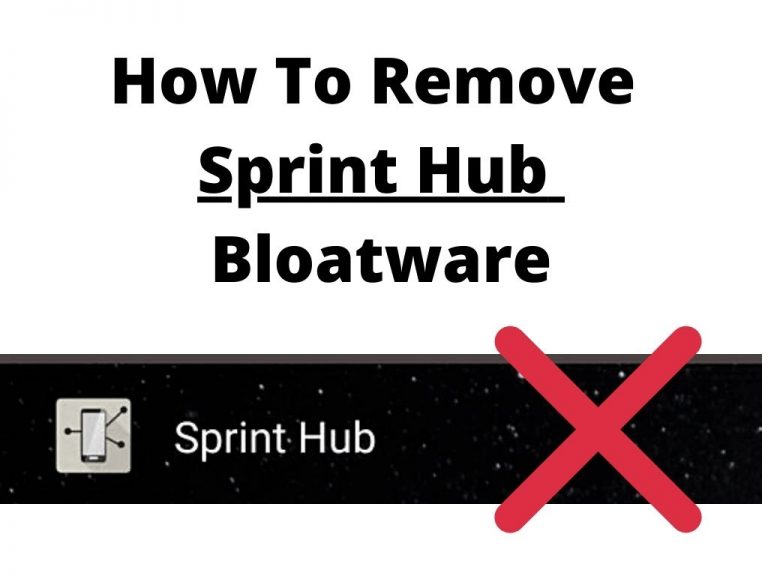 What is Sprint Hub – How To Remove Bloatware

Sprint Telecommunication Service for some time has been in partnership with T-Mobile brand in delivering an effective internet and telecommunication services after over 120-year legacy. Before their merge, in the United States, Sprint has been among the top four telecommunication giant with close to 54.3 million customers.

This has, however, not been without roaming network issues which over the years has become an essential part of wireless networks. Though to a large extent, this was curtailed in The United States because the first mobile operators were able to limit their service to limited areas. This way, effective coverage was provided, customers.

The roaming challenges continued which made the top telecom companies like AT&T and Verizon to decide that for there to be effective roaming network; it’s of utmost importance to build or better still buy a nationwide coverage., hence the need for a network hub.

This simply refers to a common intersection point where all the network devices converge. In other words, network hubs refer to devices that have the capacity to connect to various segment of a network. This segment can contain multiple ports. With this system, the roaming network will be more efficient, cheaper and of cause accessible.

The collaboration of Sprint Corporation and T-Mobile gave rise to the introduction of the hub network, which has been more favourable than it was in the time past.

Furthermore, this hub network helps to create a virtual wireless operator with a broader range which in turn makes it easy to roam a network. Therefore with this, it’s now easier for T-Mobile or Sprint together with other small rural carriers to compete favourably with the top rival networks.

A network hub functions in a buying and selling manner. For instance, wireless operators can have access to more subscribers just by signing a single agreement with a facility provider. But first, these carriers must be part of the hub, which is the only platform where the business relationship can be carried out through the charging rate can be negotiated.

With a network platform like this T-Mobile and Sprint, can get instant access to be connected with numerous smaller wireless carriers from 2G, 3G and even 4G LTE across the United States. This has, to a large extent, shown a great deal of success, especially to networks involving the next-generation 4G LTE such as Qualcomm which is already advanced in this field.

Also, they’re at the verge of launching smaller chipsets that will operate with a high-tech device, and as well allow different LTE frequency bands. With this innovation, there won’t be any hindrance of network roaming across an LTE device in the United States.

Furthermore, this hub service provides a vast roaming platform for any Sprint’s subscriber to freely roam and get connected to other network carriers, no matter where they’re in the United States.

What remarkable access of possibilities for Sprint network to focus now on perfecting their network speed to attain to the demands of the urban market rather than thinking of a strategy to expand their network coverage into more far rural markets just for expansion sake.

In fact, to an extent, there has been a massive growth in the customer base since the merger took place between Sprint and T-Mobile. With this, it’s now cheaper to acquire their device with broader wireless spectrum across the urban market.

With the Sprint hub program in place, they’re now stronger to compete favorably with top competitor wireless network providers which make the merger very productive. In fact, you might want to know that Sprint Corporation has been in the forefront in the Competitive Carrier Association’s Data Access Hub Program which was the platform that steered various carriers not minding their organizational size to have access to massive 4G LTE that is spread nationally.

During this program, Sprint, together with T-Mobile Company collaborated with a good number of small rural carriers to manufacture a virtual 4G LTE wireless network.

Bloatware has been the major issue with the majority of custom Android mobile activated under a carrier. This is because the device contains a lot of unnecessary Bloatware apps directly from the manufacturer. That’s not all, the carrier you subscribe to adds more Bloatware apps as well. The only device exonerated from these are those with inbuilt high Random Access Memory (RAM), unlike mid-Range mobiles whose manufactures have already taken all the spaces required from essential apps.

Bloatware takes a large chunk of the storage space on your device. The most difficult ones to remove is the pre-installed apps that are sometimes being weaved to the ROM. That’s why most times you’ve to root your android device just to remove it.

Aside from this, using the force stop technique will hinder them from running in the background though at times it might affect the full performance of the phone. Another thing to take cognizance of the mobile installer, which often downloads apps while the device is the use that why you most times you get the process request notification.

The disadvantage of these apps running in the background is the fact that the battery gets to drain faster. You might have to depend on battery-saving apps unless your phone has great battery life.

On the other hand, Bloatware help in the effective use of a particular carrier, that why most of the apps are pre-installed in the ROM of the device. The challenge is that in most cases, these apps exceed the required limit, thereby filling the android mobile with an unnecessary app.

Sprint Hub is not left out in the installation of Bloatware Android app like other carriers, but the good thing is that these unnecessary apps can be uninstalled. There are methods you can to disable and even delete these set of applications with the device is rooted or not. Depending on your preference, you can choose the method you like.

Note: Before you proceed with uninstalling, some of these unnecessary apps, it’s essential to know that most of these pre-installed apps function directly with the network signal. For instance, if your device uses an e-SIM, you must inquire from your network operator because deleting can lead to the absence of Network Coverage.

The challenge with this method is that the app will start again when you mistakenly open it. So to avoid this, from settings, you need to Force Stop the app again.

Approach 2 – The Use of ADB Commands to Disable Sprint Apps

The apps can be disabled based on their ADB package name. You can find these package names using the command “ADB shell pm list packages”. Depending on the title, the Sprint apps can be excluded. Right after that, use the “am force-stop”, and “pm disables commands” together with the Application package name.

It’s essential to try the other two approaches mentioned above before this last one because it requires Root Access. This method can be used by those who have already rooted their mobile device. It won’t make sense to root your mobile device just to uninstall only Sprint Apps.

Note:  This last method directly deals with the system apps, so it requires a careful approach. Preferably, you need to completely back up your data before using commencing this process.

One major issue of Samsung Galaxy S8 with Sprint carrier is the unnecessary background running which depreciates the battery life of the device. On Samsung Galaxy S8 the Sprint Hub services cannot just be disabled just like that because some users might want to make use of the Calling+ service it offers. But you can do the following;

Sprint Hub allows Sprint products and features for devices operating on the Sprint network. It enables subscribers to turn on Sprint products such as Voice over WiFi and assists Network engineering for the customer who made a report on any service concerns.

With this platform, Sprint or T-Mobile can instantaneously connect to various smaller wireless carriers across the US, which can, in turn, link back to them. Finally, the hub has the ability to connect all generations of wireless networks from 2G, 3G to even 4G LTE networks.

What is the best method to get rid of Sprint hub?

At the top right-hand side of your device, press the three-dot menu and from the drop-down, select system apps. Next, scroll down and select Sprint Hub from the application list. Click on the force stop button for the app to quit before it restarts.

What is the use of Sprint hub?

With Sprint Hub it is easier for T-Mobile and Sprint to get connected to many smaller wireless carriers be it 2G, 3G or even 4G LTE networks across the US. In turn, these carriers can also link back to them

What does Carrier Hub Sprint mean?

Sprint products and features function optimally on Carrier Hub. With it, customers can also drop their complaints, and it will be attended to.

What does the Hub app on my phone signifies?

Hub app is an intelligent app installed on your Android and iOS devices. This aids to enrol mobile devices get to manage their resources. Some of these services include directory of people, enterprise app catalogue, actionable notification for employees and some custom tab for browser resources.

Is there any risk involved in rooting a device?

Device rooting is a process that grants to access to fully control your device the way you want; it’s more like jailbreaking. This simply means a procedure of compromising the security model installed on your phone. Through this, Malware can easily breach your mobile security.