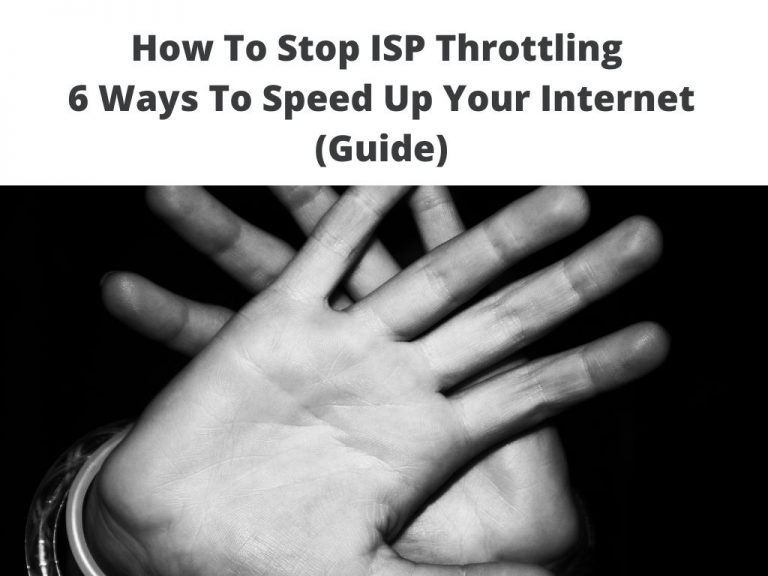 Well, it’s nothing that some of the internet service providers have a tendency of slowing down their customer’s internet for one or two reasons. Have you recently noticed web surfing, gaming or streaming performing poorly out of the blues? Are you unable to stream your movies seamlessly?

Our web pages taking too long to load? If yes, there is a possibility your ISP is monitoring and slowing down your internet on purpose through a process known as throttling.

There are also chances that the ISP can throttle one side of network traffic, say streaming. This process is known as differentiation. Researchers at the University of Massachusetts working closely with Dave Ghoffness, the assistant professor of Computer and information science at Northeastern, found out that nearly all the Internet service providers in the country are in on it. The real question is, how can you stop ISP throttling? This brief explains some easy yet effective ways to prevent throttling and differentiation.

Why do ISPs throttle internet usage?

ISPs usually throttle data to prevent excessive and reckless data usage. This is done through limiting speeds for certain users and websites as a way of reducing data usage in the whole network. This gives the ISP more opportunities to serve additional customers with the existing network capacity.

Is your internet usage throttled?

Here’s how you can realize if your internet is being throttled. Comcast, for example, was using the Sandvine’s Congestion management software to identify the heavy internet users and throttle their data usage. That said, most ISPs in the market have denied using such technologies to limit data usage. So, how do you know that you are throttled?

One of the most basic ways of knowing when internet is throttled is to run a speed test. Do this normally and repeat with a VPN. The difference might be significant if you are throttled. But do you think a speed test is enough?

No, a speed test is never enough when determining to throttle. It actually starts from the protocol level. The company might choose to restrict video streaming to a lower resolution. Therefore, it’s a bit difficult to notice throttling by simply running a speed test.

Use tools to detect throttling

There are many third-party tools that can greatly help internet users detect throttling. Tools such as Glasnost Project can actually send notifications whenever the internet is throttled. Unfortunately, this tool has been discontinued. Use other tools such as Internet Health Test, and the YouTube test. These will help you detect any kind of throttling as soon as it occurs.

The best methods of stopping Throttling

After detecting that your internet is being throttled, the next thing to do is to look for effective ways to stop it. Here are some of our recommendations. There are countless methods but the ones explained below are the most effective.

My favorite method is the use of a VPN. As I have already explained, throttling means that the ISP will see and track your internet activities before making the decision. Hence, to block all forms of throttling, you just need to curtain your ISP from seeing any of your browsing activities. To do this, use a genuine and highly reliable VPN.

The VPN wraps all the internet traffic in an unbreakable layer of encryption. This mainly prevents your Internet service provider from tracking your websites and protocols that you are using. Secondly, it stops the ISP from separating the traffic. This is because 100% of your traffic is encrypted and routed on the VPN.

How to use a VPN to stop throttling

Not every VPN will be the best and effective for this purpose. So, take time to look for the best VPNs that will serve to speed your P2P downloads and Video streams. Some of my suggestions are IPVANISH, VyprVPN and Express VPN.

Another significant way of reducing instances of being throttled is to monitor your monthly internet usage. Make sure you don’t exceed the set limits. Some ISPs always have higher data caps that a typical internet user cannot exhaust in a month.

When shopping for internet providers, make sure you take your time to search for the best ISP depending on your data usage. Different ISPs have different data caps. Some of them have a 1TB data cap while others have a lower data cap. The trick is to choose widely and you will thank us later.

Will a VPN stop ISP throttling?

Yes, but not in all instances of throttling. Using a VPN will stop most throttling performed by an ISP. However, it may not stop throttling as a result of data overuse. It will never be in a position to disguise how much data you have used. However, if your ISP throttles data depending on your web activities and location, a VPN can hide that information easily and prevent throttling.

Throttling of Internet is legal in most instances. The ISP always throttles the internet because of high data usage. However, ISPs should always inform their customers in advance and warn them before throttling.

In some instances, they can easily see VPN traffic mainly because an encrypted connection has characteristics that are specific to a VPN. The provider can also check the IP address to determine if you are using a VPN.

How do you tell if your ISP is throttling you?

Your ISP will use your browsing information to set limits on your data usage. To stop this, you can use a VPN. This hides your browsing information entirely and blocks any attempts by your ISP to limit the data usage. If everything proves futile, express the concerns to a government representative. The Federal Communications Commission officials can help deal with the issue especially if you are using the internet for business purposes. Otherwise, keep an eye on the amount of data you use on monthly basis especially when there are data caps.