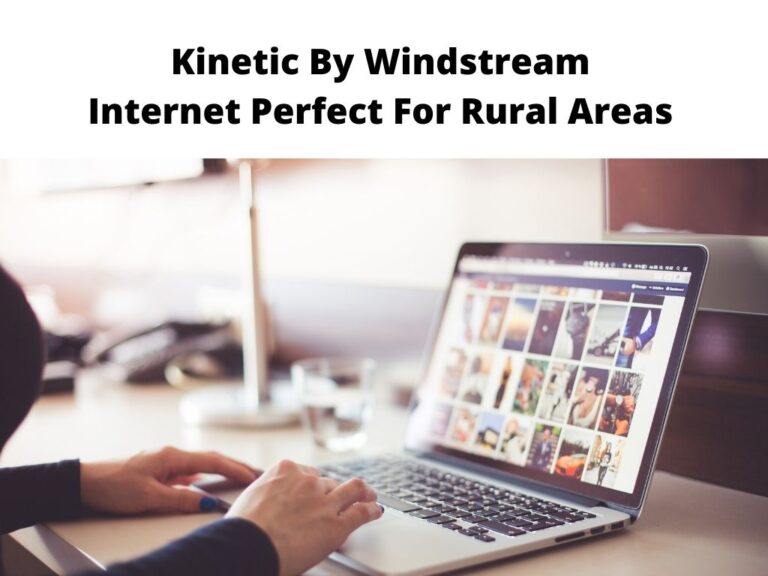 Kinetic By Windstream Review- Internet Perfect For Rural Areas in 2021

If you live out in the country, Windstream is among the service providers bringing high-speed internet. The truth is rural internet options tend to be fewer. That’s why when you’re shopping around for a service provider; you will either have to go with satellite internet or any local provider that’s available.

Kinetic is the brand name for the internet service from Windstream. It provides faster speeds than what you will typically receive in rural areas.

Also, depending on the region, the internet plans can be pretty cheap. So, what is unique about Kinetic by Windstream, or is it another rural broadband provider?

As mentioned, internet options in rural areas are limited. Most people have to settle with whatever they can find.

But if you had to choose between satellite and Kinetic, you will more likely get value for your money with Kinetic.

Well, it won’t be the fastest service or most reliable considering its DSL internet, but it will get the job done and suit your needs.

The DSL network from Windstream is designed to deliver the fastest speeds possible than most satellite or fixed wireless.

Another thing that sets aside Kinetic internet service from its counterparts is the fact that customers are allowed unlimited data.

It’s hard to beat unlimited data and no contracts. These are perks you won’t easily find with the other options.

With that being said, the speeds and pricing vary by location. No doubt it’s a letdown because you will basically have to accept what’s available at your address or location.

However, people closer to the suburbs and cities may enjoy fast speeds and even lower introductory prices.

This means you will need to take time and determine the best service provider for all your needs.

Besides the low introductory prices in some areas and relatively fast internet speeds in the rural areas, there isn’t much that stands out about the Kinetic Internet service.

Even with the large coverage area that spans across eighteen states in the US, Kinetic still has a small coverage percentage.

As a matter of fact, its availability lies at 2.75% of the population. This indicates that Kinetic Internet is mainly reserved for rural areas and suburban regions with low population density.

It’s what determines the coverage percentage. Some providers have a smaller coverage area compared to Windstream but are available to twice as many people because they operate in metropolitans like Washington, DC.

Kinetic by Windstream Plans and Pricing

Kinetic structures its internet plans a bit differently from the other providers. As a customer, you start with any one of the single plans available at your location.

This means your address will most likely determine the internet plan. Then, there is an alternative to upgrade and opt for faster speeds at an added fee.

This can only happen if the faster speed is actually available.

Check out the Kinetic Internet plans;

The Kinetic gig plan is available but not listed. You’ll also notice there aren’t any faster speeds listed for the Kinetic DSL service.

The thing is, higher internet speed tiers are typically upgrades to the base plan. They are not separate plans.

For instance, if the Kinetic 200 plan is available in your area, you can choose to upgrade and get faster speeds for an additional monthly fee.

The Kinetic plan you get and its cost mainly depends on your particular address. For the lucky ones, both the 200Mbps and 400Mbps plans may be available.

As such, you will be receiving the maximum speed offered in either of the plans. It’s also possible that you’ll have access to only a speed less than 50Mbps.

And even though you’ll be getting less than the maximum speed in the plan, it may not be available for a cheap price.

The Fiber service is a bit more solid in terms of speeds and pricing. In some areas, the starting speed is 400Mbps and others 200Mbps but for the same price.

That said, the starting prices can be somehow volatile and shoot up after the first 12 months. In that case, the monthly prices range between $55 to $67.

Windstream offers a free upgrade to the gig plan for three months. It doesn’t matter whether you opt for the 200Mbps or 400Mbps plan; an upgrade to the Kinetic gig service only adds $30 to your bill but starts with the fourth month of service. It’s such a generous deal for an upgrade.

Kinetic by Windstream Versus the competition

In comparison to similar providers, the Kinetic DSL is generally faster. If you are in luck and fall in the market with an introductory price of $27, this DSL service would also be cheaper.

As such, Kinetic DSL tends to stand out from most other DSL providers.

But as a fiber internet service provider, Kinetic doesn’t really have much going for it. For starters, the pricing is just about the same as the competing providers.

It may be a little cheaper in some areas, but that’s not a guarantee. The speeds also seem to be the same. On that note, let’s compare the most likely options, including the Kinetic DSL, satellite internet, Kinetic fiber, and cable internet.

For the most part, DSL will always be a better alternative to satellite internet. For one thing, Kinetic DSL is relatively faster.

Secondly, DSL service from Windstream is decently priced and more likely to be cheaper than the satellite internet service. So, before you commit to satellite internet, it may be a good idea to try out kinetic and see how it goes.

But some locations get speeds as low as 10Mbps to 20 Mbps. In that case, any of the satellite providers can do better.

For instance, HughesNet plans have speeds of 25Mbps. Viasat, on the other hand, provides internet plans that can hit maximum speeds of 100Mbps.

That being said, you will have to weigh your options quite well. Kinetic internet might have slower speeds than satellite internet in some areas, but it offers pretty juicy perks.

A small speed sacrifice may be worth it if it means enjoying some significant benefits. One of the advantages is the lack of data caps with Kinetic.

Keep in mind; satellite internet has some of the most restrictive data caps in the industry. Also, kinetic won’t lock you into a long contract.

In fact, there are absolutely no contracts with this type of internet. Unfortunately, satellite internet consists of a 2-year contract that comes together with a hefty early termination fee if you cancel before the required time is up.

Don’t expect your DSL connection to be perfect. However, it will offer more convenience, reliability, and lower latency than its counterpart. Heavy rain and cloud cover won’t get in the way of your service either.

People often choose fiber internet service over cable because it’s faster and more reliable. Most of the time, you will get symmetrical speeds with fiber.

The comparison between Kinetic and cable still isn’t that straightforward. A couple of factors will determine the right choice of service.

The first factor is the Kinetic plans accessible at your address. Another thing is cable providers offering service in your area.

If you are after speed, the Kinetic gig service is lower priced compared to the gig plans from a couple of other providers.

With Kinetic, there is a free upgrade. The Gig service may costs you only $37 monthly for the first three months. Thereafter, the price will rise to $67 per month until the first year of service ends. From the 13th month onwards, the gig service costs $85 per month (the pricing varies on every market).

When it comes to cable internet, the gig service is most likely to cost an amount ranging from $80 to $110. Later on, it spikes to over $100 after the initial 12 months are over.

If you want to save a couple of bucks, we would recommend kinetic fiber over the cable gig service. There is a high chance it will be cheaper, and you even enjoy the privilege of symmetrical speeds.

All in all, it’s essential to do a little bit of research before taking the plunge. If Kinetic fiber is accessible in your area, compare what you’ll get to the plans and prices from other service providers in the same area.

This way, you pick the best internet service provider for you.

Customer Satisfaction is key, especially when it comes to internet service providers. Unfortunately, ISPs have always had a bad rap in this category.

The American Customer Satisfaction Index gave Windstream a score of 61/100 in 2020, which is considered below average in the industry.

While the below-average customer satisfaction is concerning, let’s not forget that 80% of the Windstream Kinetic network is DSL.

Compared to other types of internet service, DSL is on the slower and less reliable end. With that in mind, we can comfortably say many of the issues with Windstream stem from the network and not necessarily poor customer service.

As much as the Kinetic prices and speeds vary by location, the fees and service terms remain the same. Finally, here is a welcome change.

The Wifi equipment rental fee is $10 per month (or $6 for the lucky few). The rental fee is lower than most, but you can skip it altogether and use your own equipment.

Unless you’re signing up for the Kinetic Gig service, the $50 internet activation fee is unavoidable. It’s separate from installation, which costs nothing, whether professional or self.

Is Kinetic Internet any good?

Kinetic Internet is an excellent deal for rural folks and people living in the suburbs. The plans come with no contract requirements, unlimited data, and your speeds are never throttled.

The price for Kinetic internet is also relatively cheaper than most of the competing cable providers. If Kinetic is available in your area, conduct some due diligence and decide the best fit.

Does Windstream offer internet only?

Yes, Windstream offers internet-only plans. You can pick any one of the three available internet plans and upgrade whenever necessary at an additional fee.

What internet speeds does Windstream offer?

The internet speeds range from 50Mbps to 1000Mbps.

Is Kinetic internet available in my area?

Kinetic Internet is accessible in 18 states. If you’re not sure about its availability, you can always check the coverage map.

Alternatively, go to the Windstream website and enter your Zip code. This will tell you whether Kinetic internet is available in your area or not.