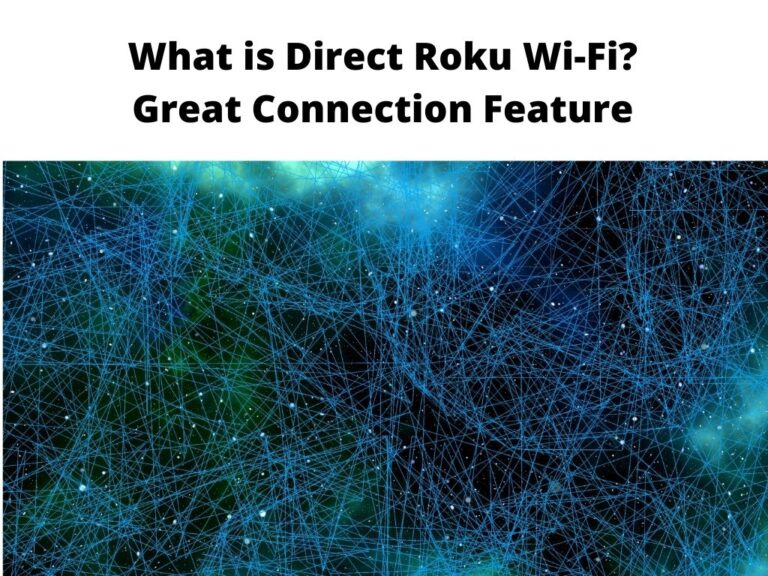 Many people come across Direct Roku Wi-Fi by chance. As a matter of fact, we wouldn’t be surprised to know some have never heard of it.

With internet service providers, you can never be too sure about the kind of service you’ll get. Sometimes you get your money’s worth, and others you don’t.

After struggling with a poor connection for a while, I decided to search around and see if there is a strong enough Wi-Fi connection available.

That’s when I stumbled upon Direct Roku Wi-Fi on the list of available connections. Naturally, anyone would assume this is a Wi-Fi network.

Well, it’s really not. Direct Roku isn’t a network you connect to and get internet.

Now that we know what it’s not, there is one question left to answer.

What is Direct Roku Wi-Fi? Don’t move, it’s all covered in this brief.

Roku is a well-known American brand that creates digital media players. The media players are designed to stream video and audio services using the internet.

Roku develops various devices to match the needs of different users and their interests. There is even the Roku smart TV.

Aside from the devices, Roku has a channel of its own. Its name the Roku Channel and it’s a free streaming channel available on all their media players.

That being said, Roku has been doing everything possible to keep up with the latest technological advancements.

For instance, users can watch movies and TV shows of good quality. There are various models of the Roku streaming devices.

Depending on the device you choose, you’re able to access their host of services in Ultra HD or 4K quality.

This means you can watch all the content you need in the best quality possible.

Furthermore, the devices can work quite well with average-speed connections to give users the best of the entertainment world.

Also, each of the Roku media players connects to the internet without any issues. You can easily get WiFi on your Roku device and start streaming your favorite shows.

Most of the Roku streaming players work with OTT media. OTT media is a service that basically gets content from the internet and delivers it directly to the viewer’s screens.

Many of the Roku products are dependent on the internet to work and provide entertainment. This should explain why there is a focus on proper and easy connectivity.

Wi-Fi Direct is a new and promising feature that has been in use for quite some time now. More devices are using this feature, most notably Roku.

This means the devices can connect directly to each other. It creates a means of communication between the devices wirelessly in a similar manner to Bluetooth.

What is Direct Roku Wi-Fi?

You’re probably here because you want to find out more about Direct Roku Wi-Fi and what it means.

The newest models of the Roku devices come with a network feature and that is Direct Roku Wi-Fi. Several devices use Wi-Fi Direct.

One of them is the newer model of Roku. That’s how Direct Roku Wi-Fi came to be and it’s actually fair to say this is Roku’s version of Wi-Fi Direct.

As mentioned, Wi-Fi Direct allows the users to connect devices to Wi-Fi directly rather than through a router.

It’s like connecting devices to Wi-Fi, without the typical Wi-Fi. This is made possible since almost every streaming device relies on the internet to work.

As a matter of fact, it’s not really possible to stream without an internet connection. This should explain how it’s easy to connect two devices without necessarily requiring a wireless router.

For a long time, people have always used Bluetooth whenever they wanted to transfer data from one point to the next.

But then the dynamics have changed immensely and people actually find Bluetooth too slow. Also, the devices using Bluetooth require specialized hardware for this particular function.

Wi-Fi Direct comes in as an easier and faster way to connect two devices and allow them to communicate.

As a result, these devices can exchange videos, photos, files, and so on, as long as one of them has an internet connection.

With that being said, Roku Wi-Fi has a slightly different approach. The Roku 3 is one of the devices that use the Wi-Fi Direct feature.

It has a remote control designed to communicate with Wi-Fi Direct instead of the typical Bluetooth connection or infrared blaster.

The remote control doesn’t even connect to your wireless router to receive Wi-Fi. Rather, the Roku device creates a Wi-Fi network, which the remote connects to, and the two can now communicate over their new, exclusive network.

It is this Wi-Fi network that people spot on their laptops, smartphones, or PC.

It’s easy to think you’ve found a Wi-Fi network you can connect to and access the internet.

Unfortunately, it’s impossible to connect to this new network simply because you’ll need a security key.

The said security key is automatically negotiated between the two devices allowing a smooth connection process.

The Direct Roku Wi-Fi is a feature meant to introduce an element of convenience. The Roku device and its remote control can communicate easily with each other using mainly the standard Wi-Fi protocols.

It eliminates the daunting setup procedures associated with the likes of Bluetooth.

The connection process occurs automatically and that means you won’t have to enter any passcodes into the remote.

There is no doubt this is a promising and very useful feature, which people have been waiting for all this time.

How to connect a device with the Roku Network?

While this new network creates means of communication between the remote control and Roku device, there are still other ways to use this feature.

For instance, the feature allows you to use a mobile phone to communicate with other devices like the TV, etc., in case your remote is lost.

However, it’s not as simple as it sounds. In case you lose your remote control, it’s possible to simply connect another device into the Roku network to adjust the volume or change channels.

But some issues with the connectivity still stand and most users are unable to successfully get it working.

For the most part, connecting to this network is not straightforward. You will have to tamper with different kinds of things before it works out.

Though, there is an alternative that makes the situation easier. To do that, you should have a smartphone or tablet with the infrared blaster feature.

Unfortunately, many of the newer phone models lack the infrared blaster. But if you can search around and find an older model, then you’re good to go.

With a remote control app, you only have to connect the devices to the new network and proceed to control the Roku media player.

As such, your mobile phone acts as the remote even when your real remote control isn’t available and can’t get another one at the moment.

With that being said, there could be a downside to this feature. Several people have complained about the Roku network slowing down other connections within range.

The result is slower internet speeds than what’s normal. At one point, you might have experienced a slow internet connection. It’s difficult to do anything online with slow speeds and lags.

As such, this is a big problem because you can’t achieve any of the online activities including streaming videos, gaming, video calls, and so on.

So, how do you get rid of this problem? While many sources say it’s unlikely, there is surely a solution.

How the Direct Roku Wi-Fi works?

Now that we have an idea of what Direct Roku Wi-Fi is and what it’s used for, let’s see how exactly it works.

For starters, the Roku device uses the Wi-Fi Direct feature to create a network of its own and communicate seamlessly with another device, which in this case is its remote control.

Here is how it accomplishes these functions.

The main advantage of this network is its easy setup compared to its counterparts like Bluetooth.

When any two devices connect, they automatically do so through WPS. This is meant to be a means of creating a secure connection. Though, WPS is not the best way to secure your connection.

This is basically the most secure way to encrypt your Wi-Fi network. Most of the devices with the Wi-Fi Direct feature use WPA2 encryption.

This is very important because it’s a protocol that allows Wi-Fi direct devices like the Roku to discover each other and then the services they support before creating a connection.

A Wi-Fi Direct device might discover several other compatible devices in the vicinity and narrow down the list according to the services common with each of them.

How to disable Wi-Fi Direct on Roku devices?

Direct Roku Wi-Fi has its good and bad sides. On one hand, it offers speedy and straightforward connections between the Roku remote control and the device.

This way, there is easy communication between the two.

On the other hand, Direct Roku Wi-Fi runs on the very same frequency as the USD’s Wi-Fi. What happens is Roku actually uses Wi-Fi direct to connect some remote controls.

It utilizes the channel it receives the internet from. The result is interference with the signal on other devices causing their connections to fail or drop intermittently.

This is more than enough reason to disable Wi-Fi Direct on Roku.

Here is how to go about it depending on the model;

Unlike the normal network, direct Roku Wi-Fi doesn’t have a default password. It’s a network that is used to connect the remote control to the Roku device for smooth communication with each other.

What can you do with Wi-Fi direct?

Wi-Fi Direct is a type of wireless technology designed to establish a direct Wi-Fi connection between two devices without necessarily requiring a wireless router.

You introduce Wi-Fi direct enabled devices to each other and then create a connection.

While Wi-Fi direct is a great and easy means of transferring data or files between devices, it tends to be vulnerable.

Remember, this technology is still a work in progress but we expect much better in the future.

Direct Roku Wi-Fi is a feature that’s helpful when it comes to accessibility. But, it also has a reputation for messing up internet speeds or lowering bandwidth.

If that’s a great concern, simply use a wired connection. Generally, Roku devices work quite well and deliver impressive performance.

This feature definitely has potential and more upsides than downsides.