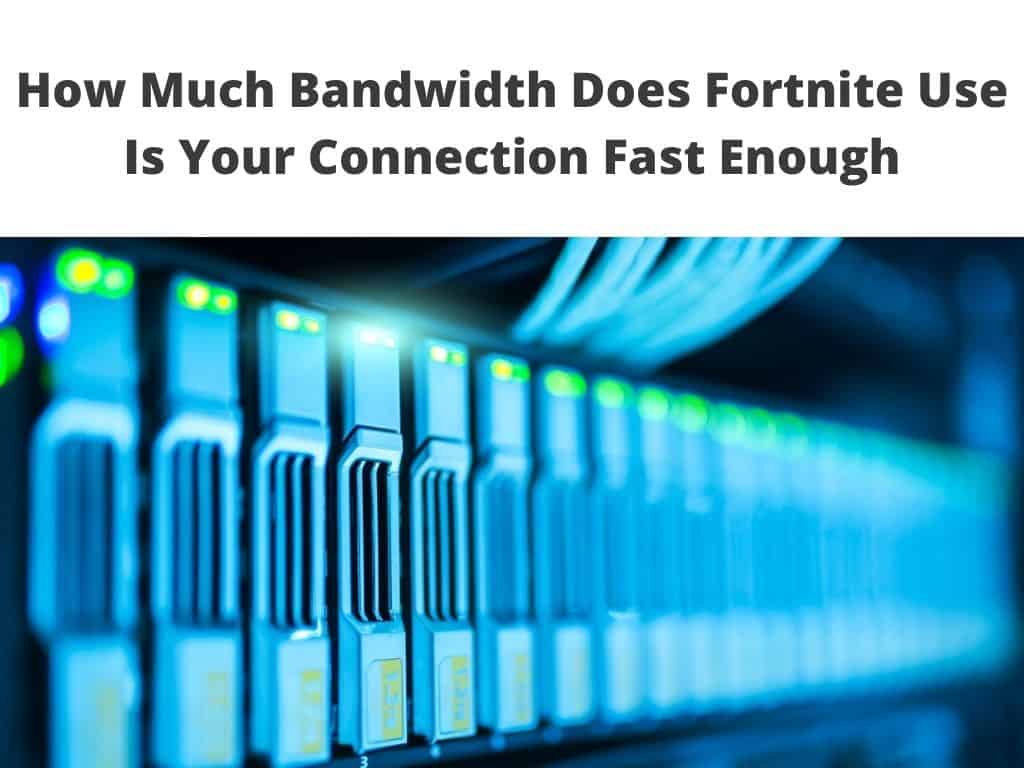 How Much Bandwidth Does Fortnite Use – Is Your Connection Fast Enough

We love a good video game like Fortnite or action-packed shooter games. As more advancements in technology occur, new and fresh content is introduced and there seems to be a new game to try every single day. The positive effects of video games are numerous. Scientists confirm that video games help boost memory and improve capabilities of problem-solving. That said, we now have one major problem facing people living in rural areas, which is bandwidth. Rural areas are usually undercovered and have spotty internet connections that make gaming formidable.

Playing fortnite doesn’t take up as much data as you might think. It actually uses less data than most other games of the same quality and genre. So, how much data will you need to seamlessly play Fortnite and what bandwidth is required? All these questions are answered and explained in this post.

How much Bandwidth does playing Fortnite on PS4 take?

It’s easy to utilize 90% of your data within the first few weeks of the month especially if you take more than 6 hours of Fortnite play time every month. There are equally several factors that can determine the bandwidth needed to play Fortnite.

So how much data will Fortnite game use?

The exact data that Fortnite uses varies from 5Mb more or less of the results that I will give you through my own experience with the game. In most households, there are rules on online gaming because to some extent this activity might disrupt the connection for everyone else. For instance, before kids are allowed to play certain online games, these games are tested and the data they use determined. If otherwise, the whole gaming process can inconvenience the rest of the family or get the internet throttled especially if the ISP imposes data caps.

After testing, we found out that Fortnite uses an average of 100.3Mbps every hour. This means that it’s about 15 rounds of the game and that rounds up to approximately 25Mb per game. There are several other considerations that might increase data usage. Take into account the loading menus between rounds. In such cases, it can take up to 110Mb every hour. So, if you have 1GB of data, then you can at least play about 41 rounds of the game. If you have 1.5GB of data, to download, you will probably use almost all the data in download than actually playing the game. 1.5GB of data means it’s about 16 hours of playing or about 75 rounds of the game.

Different users report different data statistics mainly because the data they use depends heavily on the game settings, the load times and the delay times between rounds. To have specific numbers on the amount of data that you are currently using, track it closely with your carrier during the play times. Some third party tools also help track data usage per hour, which may be a good determining factor in your decisions. Try free traffic monitoring tools such as Netlimiter to track your internet usage with different settings while playing.

What will happen if you track your data and find out that you are on the fast track to the overage charge? What actions should you take? The first action is to check the game settings and secondly reduce gaming rounds per day. Whatever settings makes the game run faster use less data. What this means is that the lower frame rate limits, lower resolution, lower texture, lower effects and shorter view distance will reduce your overall data use.

From the explanations above, it’s a bit difficult to use too much bandwidth and data while playing Fortnite. On the other hand, downloading the game may take up large amounts of data. The PC download of this game uses close to 20GB and the iOS download version would take a hefty 2GB. The download sizes for each of the games increase as new versions are released.

Get the right Internet connection

To have the best Fortnite gaming experience, get the right Internet connection starting from the speeds, the data caps and the stability of the connection. If possible, avoid ISPs with lower data caps if you are a serious gamer. You don’t want surprise notifications telling you that 90% of your data is used within two weeks.

How much bandwidth does fortnite need?

The game of fortnite may only need 3Mbps to run smoothly and give you the best gaming experience. But you need to check your internet and make sure the speed is enough for a seamless experience.

How much Bandwidth does gaming use?

Playing games online will need speeds of at least 5Mbps. Though, most modern models use a lot of data and speeds for you to compete and have a good gaming experience. Make sure the internet is ultra-speed and stable.

How much data does Fortnite use?

Most gamers playing this game report that it uses data between 50Mb and 100Mb per hour. That is enough but it also depends on your internet speeds and several other factors.

Is 2Mbps good for Fortnite?

For most gaming situations, you need internet speeds of 3-5Mbps. That said, some games can work perfectly fine with speeds lower than that. If you wanted to have the best gaming experience playing detailed games such as the Fortnite, the connection should have speeds above 2Mbps.

Playing fortnite will take an average of 100.3Mbs per hour but downloading the game will more. You also need to have a stable connection and good bandwidth for a smooth experience. If possible, the download and upload speeds for your connection should be above 3Mbps.