Home / Blog / What is Fiber Internet – Information About High-Speed Internet 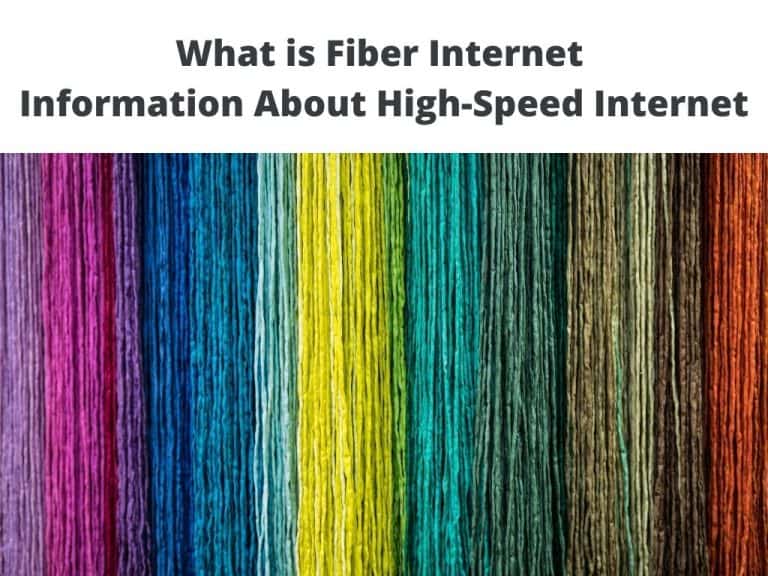 What is Fiber Internet – Information About High-Speed Internet

Fiber internet is the newest means of data transfer across the globe. This makes it the fastest form of broadband internet. The configuration is faster when compared to cable and dial-up because it easily conveys a large amount (up to terabytes) of data in a single line without restriction. Furthermore, the speed of fiber internet is more than DSL internet, satellite internet, including any other form of connection. In some countries at the moment, some ISP offers fiber internet with the speed of up to 1GB per second while some offer the speed of 500GB per second.

Furthermore, the speed offered by fiber-optic covers more distance than a traditional copper wired internet such as cable or DSL. Depending on the internet service provider you’re using, with fiber internet, expect to receive the very best broadband service. In fact, the fiber internet is designed for the future because even when the speed is increased to 1000 times faster than what it usually conveys, be rest assured the fiber optics can comfortably transmit it.

The Reason Why the Fiber Internet is so Fast.

The data infrastructure is the primary thing that determines the speed of the internet. When it comes to fiber optics, it makes use of modulated light to transfer data instead of electricity. Thus, in turn, gives it a higher bandwidth capacity because they’re no longer restricted by the physical limitations caused by using electricity which is conducted through metal.

All these make the speed of fiber internet up to 1GB per second. This is factually faster when compared to copper wires used in old connections. You might wish to know that the regular copper wires used for cable internet were initially intended to transmit just voice. Also, the amount of data if can convey at once is limited.

Benefits of Fiber internet over DSL and cable.

High download speeds – Because the fiber internet connects numerous internet users at once, it’s no surprise that it remains the most preferred choice when it comes to connecting all your home device. To further buttress this, most of the internet plans offered by various ISP offers up to 1GB Mbps, which is obviously more than what most people can handle even when their friends are also connected. As technology continues to advance, the speed will obviously keep increasing, and the gap between fiber and cable will continue to get wider.

Better at conveying information to long distances – Conveying of data/information to long distances is one of the factors that keeps affecting all electronic signals. Aside from electronics, long distances also affect electricity and light. This is because the longer distance a signal is meant to travel; the more reason it will get weaker as it reaches the final destination. For copper links, the distance is limited to 328 feet just for the strength to be maintained. However, for fiber, it can travel 25 miles before it starts to weaken. As you can see, this is more preferable and a reliable option.

It is not affected by radio interference or electricity – Copper might be an excellent medium for conducting electricity, but it still not a closed system. What this means is that other radio interference or electromagnetic waves can hamper the signal. This will, in turn, reduce the strength of the signal. At some point, it can even end up cutting the entire signal. For fiber lines, they’re more insulated against these type of interference. In other words, their signals are very much secured.

Fiber is not easily affected by wear and tear – Despite the fiber lines being extremely small in size, it is harder when compared to copper. In fact, fiber lines can carry between 100 to 200 pounds of pressure. Copper can only carry about 25 pounds of pressure. Apart from these, copper is a soft metal, and it also conducts heat. Over time, the older the cable gets, environment factors will negatively affect it. To avoid these, go for fiber internet, which is the best choice for any form of download or information upload.

Scalability – Fiber internet remains the best option you can get when considering a futuristic internet. Its ability to make use of light and not electricity makes it easier to transmit data, uses higher frequencies and losses less energy, especially over a long distance. In other words, fiber can carry more information when compared to physical cables. In some cases, fiber internet is installed with a Dark Fiber. This refers to an extra fiber inside the cable which is not utilized initially. It comes into use when internet traffic increase in a particular area. It’s more like a backbone that provides additional capacity instead of having to dig up the initial cables just to replace it with a bigger one.

Fiber internet has been around for sometimes now despite the transition happening in the digital space. This means it won’t be faced out any time soon. Indeed, it is difficult to compete over the speed of light. The fact is that, as it stands, fiber remains the backbone and future of the internet because it is more reliable. The price is also friendly when compared with other competitors. Whenever you’re presented with the option to select fiber, just take it.

When compared with the basic cable, fiber transmits information faster because it operates using a dedicated line which enhances the speed. So fiber internet is more reliable; it is resistant to many of the circumstances that cable internet is vulnerable to.

Is a modem needed to use fiber?

Fiber internet makes use of a third type of technology to be able to transmit its signal. Hence, in the absence of a fiber-compatible modem, fiber internet service will not work.

Is Fiber Internet faster when compared to cable?

Obviously, Fiber internet is faster when compared to the cable network. The speed is about 250-1,000 Mbps for upload and download. Many people can use the service simultaneously, yet the performance will not drop.