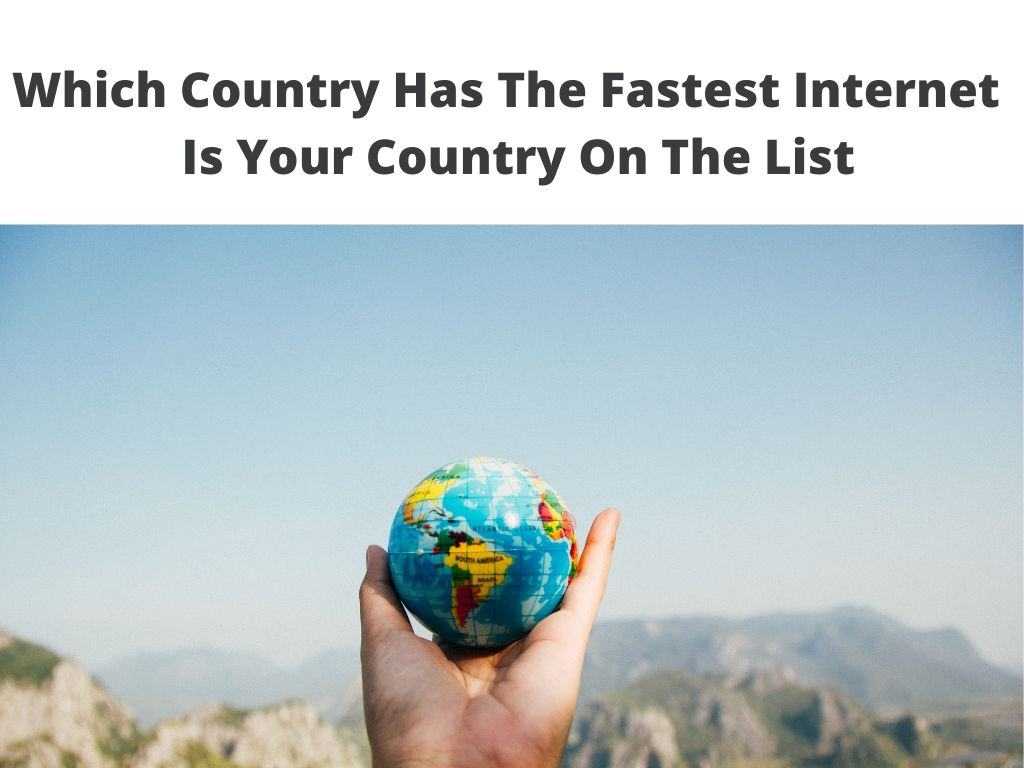 In recent times, internet speed has been gradually increasing worldwide. For instance, in 2018, the average speed was 9.10Mbps which, according to research, is about 1.7Mbps higher than what was recorded in 2017 (7.40Mbps).

Today, when one is planning to travel, considering the internet speed of the location is now top on the list which was not the same in the time past. This means that people are now choosing their ideal location not based on beauty alone but wants to ensure that the location has a high-speed internet connection. For digital nomads, having access to high-speed internet is a must to be able to work. In this write-up, we’ll outline some countries and their average internet speed but is there a country with the highest internet speed? Read on to find out.

A detailed comparison of Internet Speed by Region

Different institutions tend to rank internet speed each year. In other words, there is no particular source when it comes to internet ranking. However, the ranking results are still similar to each other through their position might vary a bit.

When it comes to consistency in internet speed, Europe remains relevant as the place to get the highest concentration of broadband internet with the prerequisite speed that leads across the world. Considering all the 53 countries within Europe, Sweden tops the list of the fastest internet with an average speed of 46Mbps.

Among the enter 41 countries within this region, the correct internet speed swings from one place to another. On top of the list of the country with the fastest internet speed is Taiwan, with a download speed of 85.02 Mbps. What this means is that a 5GB movie can be completely downloaded within 8 minutes.

Though this region comprises of large geographical area, for speed testing purposes, Canada, United States and Bermuda were considered. The United States is the fastest with an average speed of 25.86Mbps which spans to both the urban and rural areas. Also, the majority of the areas has access to fibre-optic internet, and most internet around the cities and suburbs uses broadband service.

The internet speed in this part of the world is not the best when compared to other places; however, it is still not the worst. Barbados has the fastest internet speed here with an average speed of 17.08Mbps

Though this region comprises of the wealthiest around the world, that still does not make them have the fastest internet. Generally, they’ve slow internet. Bahrain is top of the list with 5.05Mbps while other countries here cannot boost of internet speed more than 5Mbps. This means that on the average, a movie or file of 5GB can take up to 36 hours to download completely.

African is lagging behind the rest of the world because it has limited cable-based internet coverage. Majority heavily rely on wireless connectivity. Madagascar tops the list with an average speed of 24.87Mbps because of their fibre-optic service which is provided by underwater EASSY cables. Majority of the countries has a speed of 1Mbps.

You must understand that the speed test does not measure the router speed which can be seen in your house instead it measures the speed available to a particular device, for instance, phone, laptop, etc. which is connected to the router. Wi-Fi speeds are always slower than that of the LAN cable connection which offers more average speed. In most cases, why most speed test tends to consider the Wi-Fi speed is to correctly reflect the real-world situation which can be seen in different places.

Average Connection Speed – This is gotten by averaging the entire connection speed, which is considered for a period of 90 days. To do this correctly, all IPv4 addresses within the region, country or states are calculated. These do not come easy. Other factors that tend to complicate the measurement is as follows;

Parallel Requests – This is the average web page requests content which is often 94 times. For instance, at the point of surfing the internet, a web browser tends to access not only the base page but the CSS files, embedded images, ads, etc. Now each of the above-listed requests is logged in separately. This, on the other hand, tends to affect the average recorded speed.

Smaller Files – Small files have the tendency to affect speed measurement but not in the usual way. For instance, quick file downloads tend to prevent the speed from reaching the fastest rate. It is just similar to a vehicle, which must have its rate up to its proverbial fifth gear before it can reach the fastest speeds.

An internet speed will be appreciated more when you have the opportunity of visiting a location with a preferable internet speed. The web community is worldwide, but internet speed varies significantly from one location to another as you can see from the write-up. So whether you’re just an individual trying to compare the internet speed across several regions or just a digital nomad searching for your next location around the world, you can now see what the internet speed is like across many counties.

Which country has the fastest Internet in Europe?

Sweden has the fastest broadband in Europe and the world an average speed of 46Mbps. Andorra, Iceland, and Switzerland (4) are not far behind.

What makes Korean Internet so fast?

Well, a few factors made this possible. The country’s population is a major key factor. In Korea, about 522 people are residing within a square meter. Among these population, 83% of them live in the cities. This makes it easier to connect to the internet when compared to Canada or the United States.

The slowest Internet can be experienced in which country?

Afghanistan, Tajikistan, Iraq, Venezuela and Algeria are the bottom countries with the slowest internet at speed lower than 7.5 Mbps.