Home / Internet / Comcast – Two Modems In One House – Is It Feasible? 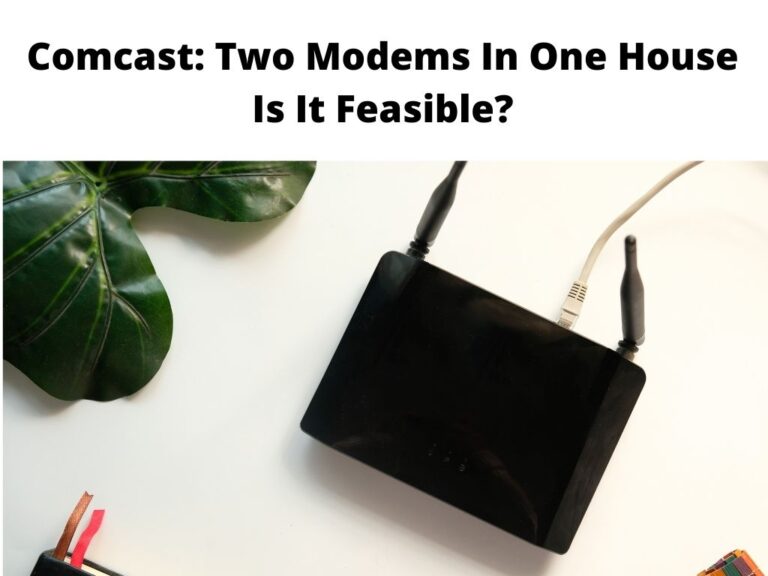 Comcast – Two Modems In One House – Is It Feasible?

The question that people have often asked is whether they can have two modems in one house with Comcast.

There is no doubt Comcast is among the leading internet service providers in the United States.

This has surely something to do with its consistently excellent and reliable speeds across the country. Its prices are competitive too compared to counterparts in the same areas.

Another thing that attracts people to Comcast is its fast modems. Comcast internet modems often deliver a strong signal that keeps devices connected to the internet without any hitches.

So, are you considering having two modems in one house with Comcast internet?

Is it even possible? Well, this is the perfect place to find out once and for all.

Why two modems in one house?

The main reason people consider having two modems in one house is to expand their wired connections.

Sometimes the device requiring a wired connection can be a bit far from the existing modem. This means wiring through walls and common spaces, which is cumbersome and to some extent challenging.

That’s why several users prefer getting a second modem that will provide an Ethernet connection to other devices in a particular room or space.

Is it possible to use two modems in one house with Comcast?

It may be possible to use two modems in one house with the Comcast internet service. As a matter of fact, it’s actually simpler than you might have imagined.

What you have to do is call Comcast customer support and request them to get you signed up for an internet-only package.

Of course, they will notice you already have an internet connection from Comcast at your home. If they ask you about it, say it’s your landlord’s connection but you’re not allowed to use the service.

There is a good chance Comcast will allow you to add and use two modems in one house. In that case, you can either rent a modem from the company or buy your own.

This will definitely depend on your needs and budget. However, buying your own modem will make the process less complicated.

We also suggest you avoid installation by Comcast. If they discover your intentions of using two modems in the same house, they might cancel the subscription.

That said, once you have the second modem, the next thing is to call Comcast customer support. You can then request activation.

But before that, connect the existing router and internet cable connection to the modem. When you call customer support, it’s important to request activation that will allow the use of two modems in a single house.

Furthermore, when buying the modem, ensure it’s supported by a particular Comcast internet package. This will aid in getting a streamlined and smooth internet connection.

It’s usually available at the bottom of the modem. If it’s not there, simply check a different side and you will find it.

Using two modems on one address and one account

Everything we have explained above seems really complicated and too much of a hassle. If you don’t want to go in that direction, there is another option.

You can add a second modem to your existing account. But remember, Comcast will definitely charge you an additional amount of money for it. It’s really the same as paying for two internet subscriptions.

Your monthly charges for internet will be higher than normal when you decide to get a second modem for your home.

As such, you have to critically think about this decision. In simpler terms, Comcast will require you to pay internet charges in double folds if you opt for the same package.

This means paying for the same service two times when you install a second modem and add it to your account. In the end, this internet service will turn out to be very expensive.

Ask yourself if it’s worth it. Are you prepared to incur all those extra charges just to have a second modem in the house?

If your answer is a big yes, you can go ahead and proceed with the idea. On the other hand, if you feel the cost will be higher than what you can handle, simply find a better way.

It can even be getting an electrician who will set up the wired connection for you in case the device is far away from the router.

The other option is using a Wi-Fi extender. Many homes often have dead spots, which receive only poor wifi signals or none.

This issue can be solved by the use of an Ethernet connection. But a wifi extender can also help in transmitting strong wifi signals throughout the house.

As long as the device can connect to the internet seamlessly without the need for an Ethernet cable, a wifi extender will work just fine. Besides, you will no longer need a second modem in the same house.

People can indeed use two modems in a single house but it’s usually a big hassle. Comcast will not allow you to casually get a second modem and start using it with their internet service.

Under normal circumstances, they will likely charge you an extra amount for the modem. There is a way to go around it but when discovered, both subscriptions will be canceled spontaneously.

Can you have two Xfinity modems in the same house?

The truth is it’s not really possible to have two modems on a single plan. Of course, there is a way to go around it but can land you into trouble with the service provider. On the other hand, you can have a second or third router without any issues.

Can I add a second modem to Comcast?

If you wanted, you could add a second modem to Comcast. But that will mean paying for two accounts and doubling your monthly internet bill.

It’s definitely not the best solution especially when the reason is getting an Ethernet connection.