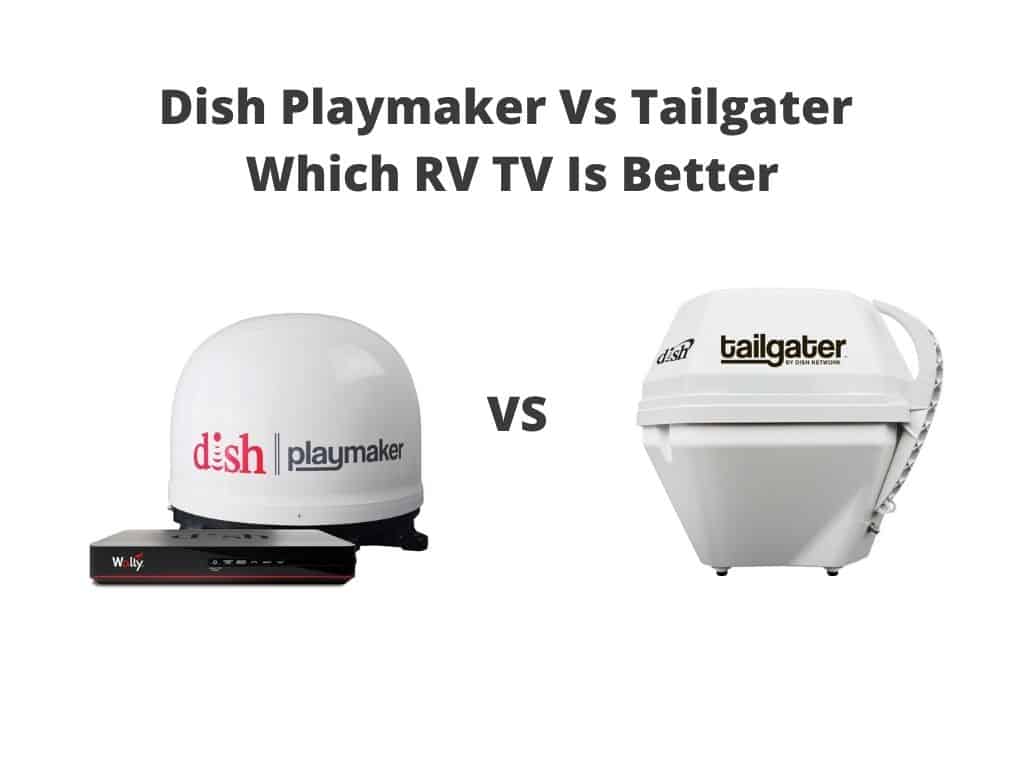 Dish Playmaker Vs Tailgater – Which RV TV Is Better

In recent times, travelling with Recreational Vehicle (RV) has captured most Americans’ imagination, unlike in the past. This is because of the freedom it offers when travelling, exploring new views, especially National parks and scenic roads that fascinate the new generation of RV travellers.

The only challenge about having RVs is the fact that you’ve to leave your TV subscription behind as you journey around.

Though it’s still possible to stream some of your TV shows using Netflix, it is still limited. That’s where Satellite TV comes in. This is a good option for those who are always on the move.

This technology has gotten better over the years because many providers have partnered with Satellite companies and introduce Satellite antennas to enhance the service. In other words, this system has provided an affordable exclusive Satellite model that RV loving subscribers can take advantage of.

Among all these models, the DISH Tailgater by KING and the DISH Playmaker by Winegard are two very widely known models to choose from.

Below are what makes each of then tick.

Winegard introduced the DISH Playmaker antenna, which was solely built for DISH high definition, together with Standard definition programming.

With this in place, viewers who focus on mobile TV will find this technology interesting because of its usefulness during outdoor activities. The system is a portable satellite HDTV antenna with a compact design. Its portability means it does not require much space to travel with as you journey around.

You’ll enjoy the user-friendly setup and how it operates. You can set up this system within 15 minutes by simply following the on-screen setup wizard. Just by selecting the state where you’re currently located, it is ready to play.

Note: Though you’ll get a better reception when the antenna is lifted up, you still need to get things like a roof mount or a tripod that needs to be purchased separately.

Gears that are compatible with it include the RK-4000 Roof Mount Kit and TR-1518 Tripod Mount. These two gears are robots and are specially made to withstand any severe condition.

Unlike before, the Playmaker has been enhanced and it can now maintain a stable connection without any interruption. From user’s reports online, they’re satisfied with the model just that during bad weather, which rarely happens, the signal strength reduces.

Some users also complained about the problem during setup, which was as a result of outdated software. This was resolved when the software was updated.

At the moment, Tailgate is now synonymous with parties and football games because it’s now a solution to enjoying TV shows outdoors or even on-the-go. The innovative Tailgater represents new-age portable satellite TV suitable for camping outdoor, preparing for parking lot games, or anywhere you desire to be entertained.

This system’s auto-tuning feature is a game-changer compared to others, especially for users who still want to enjoy their regular indoor TV shows outside without the aid of internet.

It’s easy; just add the innovative Tailgater automatic portable satellite system to your current DISH subscription in other to enjoy HDTV shows on the go.

Pricing of the DISH Tailgater

The Tailgater Options are just two;

Features of the DISH Tailgater

The majority of RV communities have praised the Tailgater not just for its durability but also for its easy installation. Just like the Dish playmaker, during bad weather, it will be difficult to access any signal.

With both the Dish Playmaker and Tailgater, DISH has provided suitable options to RV users. They’re easy to set up, can be relocated without any hassle, and also has good signal strength no matter the location it’s being used.

When it comes to price, the Playmaker is preferable, but the Tailgater, on the other hand, is fully automated and also supports multichannel.

Finally, partnering with some of the best satellite manufacturers to a large extent has enhanced the satellite services offered by DISH. This, in general, has brought about quality technology to all RV lovers.

How does the dish playmaker function?

This portable satellite antenna can be installed by anyone within minutes.

To function effectively, all that is required is to connect the 25foot coax to the Playmaker itself and the receiver, then the HDMI cable from the satellite to your TV.

Can internet service be gotten with the DISH tailgater?

No. Currently, internet service is no longer offered together with the DISH system, unlike before. If you need a satellite internet, you need to consider either HughesNet or Viasat.

Among the dish tailgater, which is the best?

This is because they’re mounted dishes that functions automatically. It also picks signals effortlessly.