Home / Streaming / How Much Is TiVo Subscription? – All You Need To Know 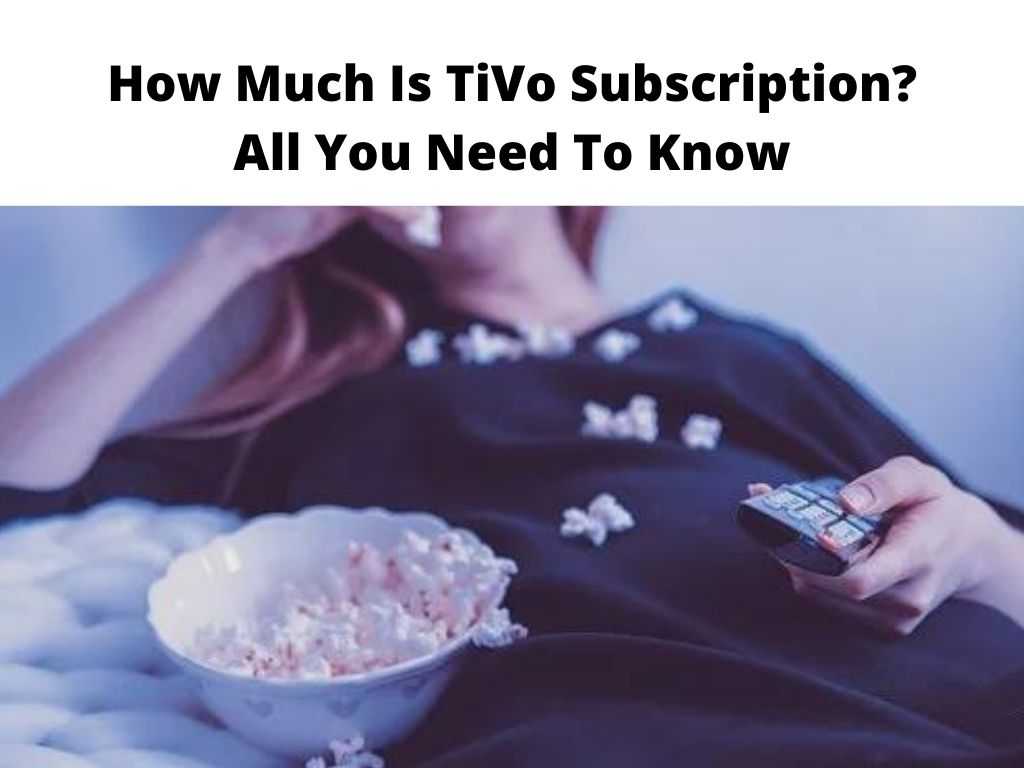 How Much Is TiVo Subscription? – All You Need To Know

With TiVo, a DVR device and service, that has been on the market for over two decades, you won’t miss out on your favorite shows, so let’s have a look at how much will TiVo subscription cost you.

The number of people cutting the cord and opting for streaming services is increasing by the day, that is a fact.

Nowadays, you can stream news, sports, TV shows, and movies easily as long as you are subscribed to one of the many streaming services available.

However, some people still prefer the good old cable or satellite TV service. Well, TiVo is designed to work with both of these services.

People with a busy lifestyle may not always be able to watch all of their favorite shows as they occur. TiVo is basically a type of digital video recorder aka DVR that’s used to save and record shows.

You can then watch the recorded or saved shows whenever you’re ready and comfortable. Perhaps you want to get this DVR service and as such, you want to know how much a TiVo subscription costs.

For starters, TiVo sells to its customers a set-top digital video recorder box. This comes at a fixed price. There is also the TiVo service plan that requires either a monthly subscription fee or yearly subscription fee depending on your preference.

The set-top box is the hardware that works by receiving a TV signal from over an air antenna or your cable provider. The service plan, on the other hand, is the actual software that’s used to schedule the recording of shows or movies, update program guides and stream all of your desired content via streaming apps like Hulu.

Do I really need a TiVo subscription?

Some streaming services like YouTube TV and Philo offer free DVR with their plans. This means you won’t have to pay for DVR anymore.

Unfortunately, it doesn’t work the same way for TiVo. The only functions on TiVo that you can access without a service plan are the playback controls like pause, rewinding live TV, and fast-forward.

But to make the most out of it, you will need a service plan. Without a service plan, you can’t access most of the content and this includes the streaming platforms.

How much does the TiVo box cost?

There are four different digital video recorders (DVR) from TiVo. You can choose any of them depending on whether you’ll record cable TV or over-the-air broadcasts or even both. Here are the five options to choose from:

This set-top box costs about $349.99. It’s ideal for the people who are no longer using cable TV (cord-cutters) but still want to access local news and sports. You can also use it to stream via third-party services such as Netflix.

The box is quite capable and it can record up to 300 HD hours of television content or at least four shows all at once. It also includes 2TB of storage and four tuners. This doesn’t work with cable.

This box costs about $399.99. It works with your cable TV service and records up to 300 HD hours of television or at least six hours all at once. It also comes with 2TB of storage and six tuners.

It costs about $249.99. It’s a great device for those who want to cut the cord especially because it provides up to 150 hours of HD television content, records up to four shows at once as well as four tuners. The users get to enjoy 1TB of storage. Keep in mind, it doesn’t work with cable.

This video recorder box works with both cable and antenna and it costs only $199.99. It can record up to 150 hours of HD programming or content and six shows all at once. It comes with 1TB of storage.

This particular box costs $179.99. Unlike the other set-top boxes, this is a whole-home solution that you can use to extend your TiVo services and capabilities to any additional TVs and displays.

All the set-top boxes mentioned above have a fixed priced. The good thing is that you own the purchased device and won’t spend more money on it. Though, the TiVo service plans require a monthly or annual subscription.

How much is the TiVo subscription?

The pricing structure of the TiVo service has been changing quite a lot over the years. Initially, there were three options available that included monthly, yearly, and lifetime plans.

More people were attracted to the lifetime plan because it meant you only pay a one-time fee and you get the service for as long as the TiVo device is functional. But then TiVo Inc. eliminated this plan after some time.

At the moment, there are two service plans to choose from:

Can I use TiVo without a subscription?

The one functionality the DVR can perform without a subscription is the playback. This lets the user pause, rewind live television, and fast-forward the programming of their choice.

However, the user can’t schedule recording without an active subscription or even access streaming services like Netflix and Hulu.

What do you get with a TiVo subscription?

There is a lot to benefit from a TiVo subscription including over 100 hours of recorded HD programming, a decent number of tuners, apps like Netflix and Hulu all in one place, and timely software updates.

The pricing of the TiVo service tends to be a bit complicated but with some information, you can understand it. Depending on what you want, you can subscribe to the monthly service plan or the yearly one. These allow you to make the most out of this DVR service. Remember, TiVo might offer certain discounts especially if you have multiple DVRs on your account.