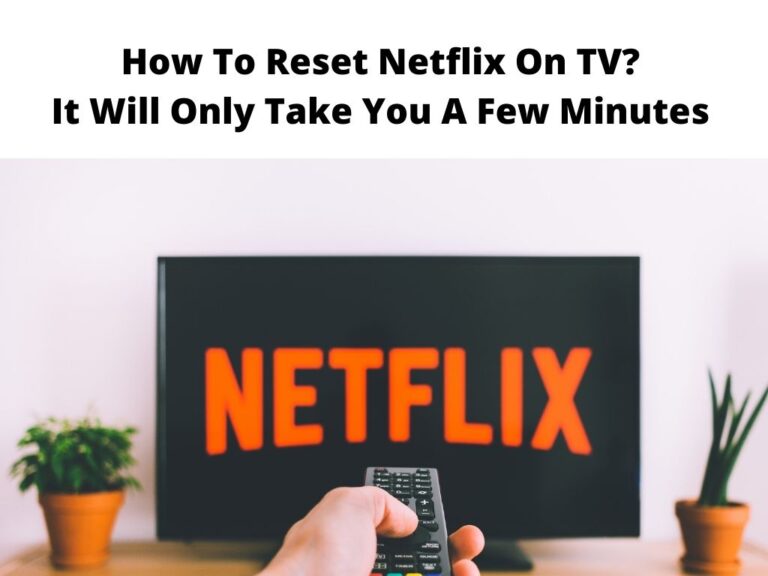 Did Netflix got stuck loading? then you are probably wondering how do you reset Netflix on TV in 2021, in this updated guide we show you how and more.

Netflix is a common staple in most people’s living rooms, whether it’s on TV or through a streaming device such as Roku.

But sometimes, Netflix gets stuck loading, freezes, or even stops responding as you watch your favorite movie.

This is very frustrating and it might force you to reset your Netflix on your Smart device. So how do you do this? Read on to find out.

How to reset Netflix on your Smart TV?

When watching Netflix on your TV or computer, have you gotten the error message Whoops, something went wrong? Fixing this is easy.

You should reset the app on your TV. But how do you do it? Read on and we will show you how.

1. On the Netflix app, click the menu button located in the top left corner of your device’s screen. It looks like three lines.

2. On your TV remote, this is usually located at the bottom left side. A new menu will open up where you will see a list of options such as Home, Downloads, TV shows, and more. Select Apps from the menu.

3. On your Netflix app screen on your TV, look for a button that says ‘App Settings’ or ‘Settings’. This will allow you to reset the Netflix app.

Hit the button and follow any prompts that appear on your television screen to restart Netflix. You may have to re-enter your account information, but only if the Netflix app had previously logged you in.

Netflix will return to working order within 5-10 minutes. Netflix freezes should no longer occur after this process.

Other Common Netflix issues and fixes

Fixing Netflix issues can be frustrating but sometimes resetting Netflix is all you need to do to get things running again. Though, there are other common issues that you can solve using other techniques.

There are few reasons why Netflix will not work on your TV or your digital device. Here are some of the reasons to look up to.

Renewed your Netflix plan and still have issues? Fixing a frozen or stopped Netflix can be simple. Just follow these instructions to reset Netflix on your TV.

Check your internet connection or reset the app through the process explained above.

1. Issues with the IP address

If you want to watch Netflix outside the US, make sure that your IP address is from the United States before you start watching.

If not, Netflix will think that you are using a proxy to access their site and you will be blocked. Fix Netflix not responding

Netflix logs out or stops working on an LG smart TV can be caused by the fact that many people are watching at the same time.

If you have a shared Netflix, account, there are chances that you have given your password to too many people or that Netflix is being used by many devices.

Netflix not responding is a common issue that you are very likely to experience right now. This can be caused by simple issues such as your internet connection being slow or other factors. Make sure your Wi-Fi is connected well.

Certain issues with an Android operating system can also cause Netflix not responding and other issues.

This is a prevalent issue for android users and should be easy to fix as well since it’s basically just a simple update.

Fixing Android Netflix not working might end up being more difficult though especially if you don’t have enough information.

Netflix is app kids are using so it can be possible that your TV is viewing something inappropriate or you have not set up parental controls.

Fixing Netflix not loading on Android will likely involve changing some settings, so it might be difficult to do, but there are also other options to consider if this does happen.

Fixing the inappropriate content playback should be easy for you.

How to Fix Netflix Not Working on Android?

You can also fix Netflix not working on the android devices if you do it the other way around. Fix the Netflix app for other devices by opening up TV settings and then scrolling all the way down to find other apps or open your TV’s manual because every device is different.

Fixing Netflix freezing on Samsung Smart TV can be done by using the remote app on your phone and Fix Netflix not responding to android or Fix Netflix loading problems.

This is mainly a matter with your internet connection, you should disconnect the device and eventually check the root cause.

After that, you can connect Netflix Back to a relatively faster and stable internet connection.

As much as we are blaming our devices and internet connection for most issues experienced when using Netflix, issues with the app can persist.

If Netflix stops working, you can force stop in your android phone settings or just reinstall the app.

Netflix Problems with the Netflix app

The most common issues with the Netflix app are, app not responding, and the app stops working. If this is the case, you should start by creating more space in your device.

The second thing to do is to force stop on your mobile device. You might also be forced to uninstall and reinstall the app.

Buffering issue is a very serious one especially when you are dealing with a mobile device such as a smartphone or a tablet.

You must make sure your internet connection is on and you are connected to 4G internet. If possible, switch to 5GHz on the router.

When you face a black screen on Netflix, there are mainly several issues for this. But you can clear the issue by clearing the cache and deleting the Netflix cookies.

If you are using windows, this can be easier if you uninstall Silverlight. This can be a temporary way of solving the problem.

Movies and TV shows not showing up on search

You might be putting in the wrong keyword. But still, Netflix users that travel often will find this problem most common.

Most movies are curtained in certain locations and for that reason, they might not be available in another location.

Check the Netflix Restrictions and understand which movies you cannot watch in certain locations.

Most issues with Netflix are caused by problems with your internet connection or the router. The first thing to do here is to make sure the internet works.

You can as well disconnect the current internet connection and try to solve the issue. If the problems persist, you can restart the app as explained above.