Home / cell / Metro PCS Internet Speed – How It Compares To Other Services? 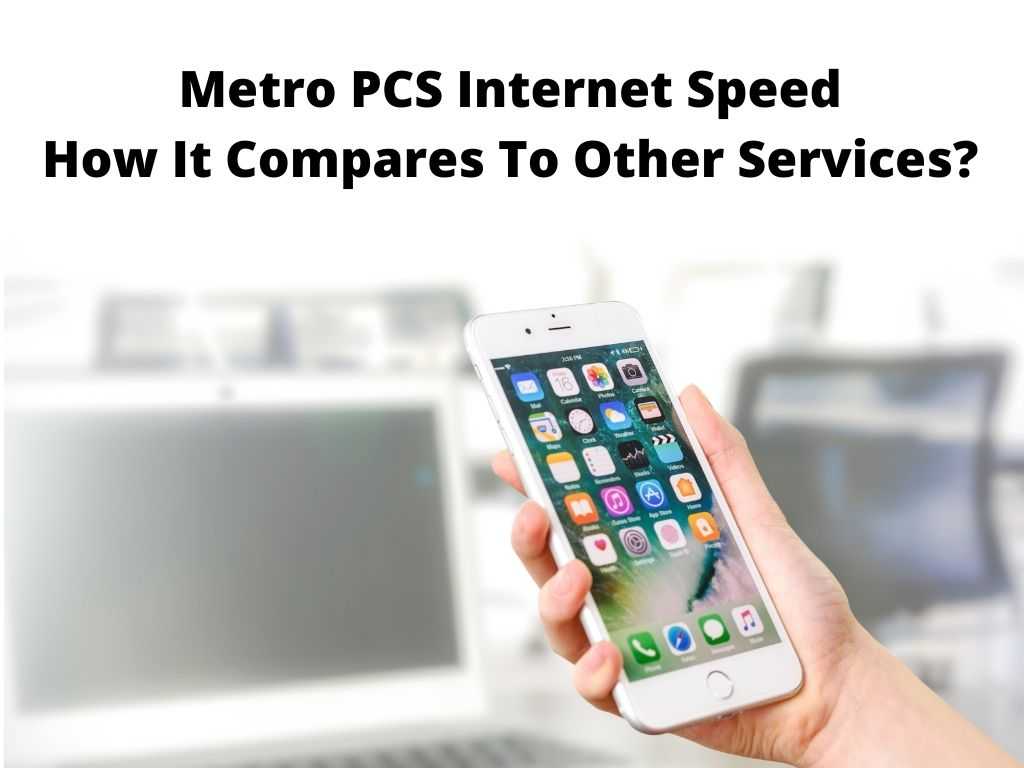 Metro PCS Internet Speed – How It Compares To Other Services?

In this post, we’ll go over all reasons why Internet speed matters and eventually compare Metro PCS internet speed to competitors.

Internet speed is one of the most vital considerations when looking for an Internet Service Provider (ISP).

The internet speed determines how quickly you can download and upload files, images, and videos and also how fast you can complete your tasks.

Unless you are a passive internet user living solo, you want to rate ISPs depending on their Internet speeds.

I personally think that Metro PCS is one of the best ISPs out there out of all the prepaid Wireless providers. The main reason for this is because you can choose between the four solid plans.

Each of the plans features the best data speed at very competitive prices. You automatically get two unlimited options. However, you must be prepared to visit the nearest metro store to purchase each of these plans.

When it comes to performance, Metro PCS uses the T-Mobile network which inevitably means that the company has the same coverage as T-Mobile.

Besides the fact that T-Mobile has good enough coverage, there are some of the issues that you should be prepared for in rural areas. This is what makes most of the users decide on looking for alternatives.

Metro PCS customer service isn’t the best. This is not news in the Internet service provision industry. The company doesn’t have the best customer response and there are a couple of complaints out there.

Depending on your internet usage and the plan you go for, you can easily save a lot of money and still get good enough Internet speeds. In simple terms, Metro PCS offers four simple and straightforward 4G LTE data plans.

The first plan is the $30 per month data plan that comes with 2GB of 4G LTE data and 2 hours of video streaming. Other advantages include the 100 hours of music streaming and 100 hours of social media browsing and lastly 4G LTE Mobile hotspot.

The next plan is the $40 per month data plan that comes with 5GB of 4G LTE data and 8 hours of video streaming. Other features include unlimited hours of music streaming and 300 hours of social media and a 4G LTE Mobile Hotspot.

What are some benefits of using Metro PCS plans?

If you choose the $50 per month plan or the $60 per month plan, you will automatically get access to Google one which will also give you 100GB cloud storage, family sharing, and Mobile backup among many other benefits.

Customers that pick the $60 per month plan will get free access to Amazon Prime. It also comes with free shipping, Movie and TV streaming, and ad-free Music.

There are a couple of other benefits that are offered by Metro PCS, especially for Families. The family plan comes with the best savings in the market for non-contract phones. This means that the family can get an unlimited data plan or even share the same data between many SIM cards and lines.

Lastly, there are no overcharge fees and contract fees regardless of the cell phone service you pick. Metro PCS offers a couple of Cell Phone brands including Apple, Samsung, LG, ZTE, Alcatel, and many others.

If you don’t intend to use phones for streaming videos and music, you can pick any basic and flip phones that are available.

There’s an option for any user to keep their sim card and bring their own sim card as they switch to Metro PCS. Consequently, you should make sure the phone is compatible with the Metro PCS sim card before making the jump.

You can easily check this using the phone’s IMEI number on the current phone. After this step, you can be able to determine the phones that are compatible with the Metro PCS Phones.

Another thing we have to note about Metro PCS is the benefits of Add-On services. The company currently has a couple of add-on services that you can try regardless of the time of the day.

It doesn’t matter whether you need international calling compatibility or the ability to block SPAM and unwanted Callers. Here are all the Add-on benefits that you can get with Metro PCS;

Metro PCS uses the T-Mobile network for the best internet speeds and performance. There are different claims that Metro PCS Internet speed is high but is usually limited by T-Mobile through a process known as Deprioritization.

If this has been worrying you, then you should consider comparing Metro PCS with other competitors. Here are some of the main competitors to Metro PCS by T-Mobile especially when it comes to Internet speeds.

When we compare Sprint and Metro PCS in terms of data speeds, some consumers might not consider this as the main consideration when picking between the two.

The Sprint Data speed averages 13.9Mbps Download speeds while Metro PCS averages 21.1Mbps. So what does this mean to you and anyone else that cares so much about Internet speeds?

This easily means that if you are out and about, you are probably using your smartphone. In this regard, it would be advantageous to use Metro PCS for download, upload, and streaming music and videos.

However, we have to clearly say that Internet speed is not the only consideration when choosing the two. You have to ask yourself whether there are any data caps for either of the two.

If you are a serious internet user that usually streams movies and videos from the internet, you probably have to worry about the data caps.

The two providers have a 50GB data cap for every month for the unlimited plans. But it would be very rare for you to bypass the 50-GB internet limit. Even after going past this data cap, you can still browse but at very slow speeds.

Metro PCS and Cricket are two of the largest carriers for wireless services in the country. Metro PCS is currently owned by T-Mobile and has an average download speed of 21.1 Mbps.

To differentiate the two carriers in terms of internet speed, we have to compare the download and the upload speeds for the two and the average data caps for the two.

Cricket uses 4GB LTE coverage while Metro by T-Mobile uses 4GB LTE and 5G internet coverage. This is clear that the coverage and the internet speed for Cricket are lower than what Metro PCS offers.

In regard to cricket, the speeds vary depending on the plan you pick. The Unlimited Cricket Core has an average of 3Mbps max download speeds and 1.5 Mbps streaming speeds.

The Unlimited Cricket More is the fastest but still, it doesn’t match the Metro PCS average speeds. In simple terms, the average download speed from Cricket 4G LTE is 8Mbps. But many factors affect the performance of Internet speeds.

The Mint Best value usually comes when you buy the six months or annual services. However, this is not mean that there are no benefits of choosing Mint over Metro PCS by T-Mobile. The data speeds for Mint and Metro PCS are going to be explicitly the same in many cases.

Besides this tie, some perks are offered by these two companies which make one of them better than the other.

Metro PCS offers a couple of perks which makes it one of the best alternatives in the market today. You will get Amazon Prime with the same packages and Google One storage with others.

Metro PCS also offers lots of exclusive trip deals and vouchers which make it stand out in the competition.

Metro PCS uses a network from T-Mobile which is the reason why these two internet services have equal speeds and internet performance.

However, T-Mobile is better off because it has an average data speed of 23.5 Mbps against the 21.1Mbps from Metro PCS.

Though, the speed might vary from one testing spot to the other. Given the fact that these two companies use the same network, you can expect the coverage to be the same.

What this means is that T-Mobile offers relatively better Internet coverage.

Comparing the data speed of these two companies, it’s easy to notice that you’ll get the best speeds with Metro PCS and not Boost Mobile.

This is mainly because Metro PCS gets the coverage from T-Mobile which is known for providing the best Internet speeds.

Every time you are online trying to download your files, movies, and Music, you will realize that Metro PCS has a better download speed.

These two companies offer unlimited data plans but there are qualifications you need for the same. Boost Mobile gives you speed restraints on some services such as Streaming music and games.

Metro PCS on the other hand will deprioritize your internet if you surpass the monthly ceiling.

If you have noticed your internet speed is not the same and you are struggling to download your music, movies, and files with this internet, there are a couple of things that you can do in this instance.

How fast is Metro PCS Internet?

On average, Metro PCS internet speed can get up to 22.1 Mbps. But many people claim that they are getting 5-31 Mbps.

This is the minimum expected speed on average. But still, there are complaints about the minimum speeds getting below 1Mbps.

Why is Metro PCS internet slow?

The main reason why Metro PCS internet is slow is because of the prolonged internet connection with the Metro PCS. This usually happens if you are using outdated software versions. Another reason is Deprioritization which is very common with MVNOs.

The performance of Metro PCS internet is based on the current status of T-Mobiles coverage and performance. This is because Metro PCS gets a network from T-Mobile. The coverage might not be the best in rural areas and few other parts of the country.