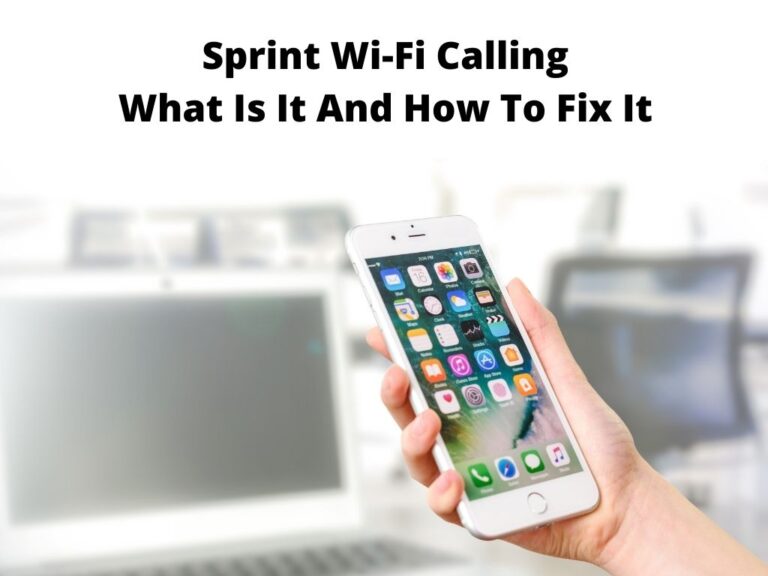 Sprint Wi-Fi Calling – How To Start Using It Now (Guide)

If you’re among those asking what is Sprint Wi-Fi calling, read on to find out more about it and how to enable it and use it.

Sprint is an American company that its server centers on telecommunications. The brand has been in existence for a long time and it has been modernized severally.

Being a brand with an emphasis on the telephone from day one, the company has grown to become one of the most known mobile network service providers with over 55 million people in the United States.

They have a presence also in Canada. From all indications, they’re the fourth largest network company in the US.

Throughout its entire existence, the company has continued to rebrand and also change its service focus but still on telecommunications.

The services offered by Sprint cuts across various services such as providing packages with 4G & 5G internet in the combination of other things.

The company is well known when it comes to using 4G, CDMA, EvDO including 5G networks. It is also important to note that Sprint was bought by T-Mobile who a couple of notable changes to the entire services and plans.

These improvements are beneficial to both the subscribers and the company at large.

The ability to use Wi-Fi to make calls is one of the features Sprint offers to its subscribers. This is known as Wi-Fi Calling, i.e., a process of using Wi-Fi to communicate rather than call packages from a mobile network.

This Wi-Fi calling is specific to only certain networks, meaning it’s not available on all networks yet. However, subscribers on T-Mobile, Sprint including other top Canadian and American networks can call through Wi-Fi.

There is no major difference between Wi-Fi calling on Sprint and other networks. The charges are the same as you’ll be charged while making calls to a normal network.

It does not involve any additional fees. This is a big plus as users can make calls within United States, U.S Virgin Islands, Puerto Rico for free.

The special advantage Wi-Fi calling offers over regular calls is that you’re free to make calls when you want because it’s through Wi-Fi.

The major unique advantage about the feature is as an American resident using Sprint, you have the opportunity of making free calls to any part of the country constantly because of the increase of free public hotspots.

But because the feature was added newly in most of the networks, so many users are still not conversant on how to use it.

Even when you’re using Sprint, Wi-Fi calling is not enabled. You need to turn it ON. The process is not complicated no matter the type of phone you’re using.

Here is a guide on how to enable Wi-Fi calling on both types of devices;

The methods are slightly different depending on the model of the Android phone but it won’t be much.

The process of enabling Wi-Fi calling across the different networks is similar but the difference differs when the call is going on.

The majority of the latest phone models support Wi-Fi calls. You’ll be unable to make use of Wi-Fi calling feature when it’s not part of your phone.

Hence, it’s not the fault of Sprint or any other network.

You now know what Wi-Fi calling entails and how to activate it. There are some cases where the feature won’t function even when the feature is part of your phone.

The issue might be traced to the inability of your internet to produce latency for it to happen.

You can reach out to Sprint’s support to assist you to solve the problem. Irrespective of your internet service provider, Wi-Fi calling is undoubtedly an exciting feature.

What is the main reason for Wi-Fi calling?

This feature allows you to make high-quality calls, send text including other media to anyone linked to the Wi-Fi network.

The process is the same just like a regular call. You’re not required to log in and the app is not needed.

Should I put Wi-Fi calling ON or OFF?

In areas with good Wi-Fi signals, it will help you preserve your battery. In the absence of a cellular signal, it’s advisable to turn it off to save your battery.

Is there any disadvantage of using Wi-Fi calling?

When there is a poor signal, you’ll experience a constant drop of calls and voice calls.

The majority of the devices do not support Wi-Fi calling. This means that you need to have a phone that supports this capability.

However, newly produced iPhones have the feature.

How does Wi-Fi call function?

It allows users receive and make calls using a Wi-Fi connection. You’ve to link up to an available Wi-Fi network with a compatible phone.

Then, you can start making calls or sending text messages. No application is required. That’s just a simple procedure.