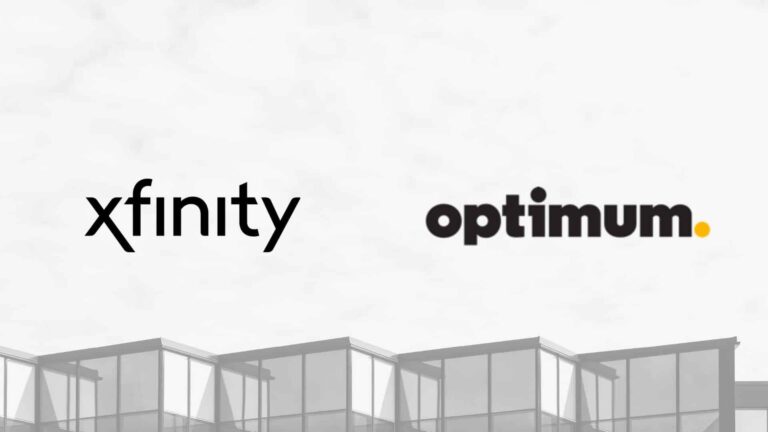 People normally search online before they buy a product or select an internet service provider to subscribe to. You might also be doing the same and then you get stuck between Xfinity and Optimum deciding which one will be the best choice for you.

There are several variables that need to be taken into account when getting an Internet connection from any ISP including Xfinity and Optimum, like speed, price, packs, installation costs, bundles and so on. Even if you are a old internet user, choosing between two providers will still be hard for you when you are stuck between Xfinity and Optimum, two close competitors. No worries, we are here to help you out with our deep comparison between these two ISP which will help you to choose the best one.

Xfinity is known to be the largest residential Internet service provider available to 111.6 million people across 39 states in all over the US. Three primary services provided by the Xfinity are cable internet, television, and digital landline telephone. It is mainly popular for the wide availability of its internet connection across the US.

Optimum is an internet service provider which got founded in 1973 under the brand named Cablevision but now it is owned by Altice. The company serves approximately 12 million people and also offers home phone and cable TV services also. The fiber service of Optimum is currently accessible to more than 360,000 people which make it the 22nd in the list of largest fiber broadband provider in the US.

Speed or bandwidth is one of the primary variables that people look for when they are trying to decide the suitable internet service provider. Speed has a lot to do with a smooth internet experience as everything such as download, upload, gaming, streaming etcetera depends on a good bandwidth.

The bandwidth choice starts from 20 Mbps when we are talking about Optimum. Optimum provides five options to their customers to choose from which starts with 20 Mbps and ends with 940 Mbps max. In between, you can also go for 200 Mbps or 300 Mbps or 400 Mbps also.

Clearly, in terms of bandwidth Xfinity is our proud winner here they provide the highest speed in the Gigabit Pro plan which is 1060 Mbps faster than the highest bandwidth plan of Optimum.

Without any doubt, we can say that our winner here is Xfinity as it is the largest residential internet service provider spread across 41 states and serving more than 111.6 million people. You may like a plan provided by Optimum but they may not be offering services in your area. So, availability is a major consideration you should look for before you jump into conclusions.

So, our winner here is also Xfinity which covers 37 more states and 99.2 more people than Optimum.

Data Caps – Is it enough

This is where things go against the continuous winning streak of Xfinity and Optimum gives a tough competition here because all the plans of Optimum come with unlimited data cap where Xfinity primary plans have a data cap of 1 TB. However, that might not be a problem for you if you are a light user because 1 TB is a huge amount of data.

There are also no data cap plans offered by Xfinity which are their fiber plans. So, Xfinity is not totally the loser here.

One thing to note that when you use too much data such as if you exceed 1 TB of data your Optimum connection may be slowed down by the company but there is no official data cap announced by Optimum.

Price is also one of the main factors that should be considered wisely while selecting an internet service provider. The variable price is more important when you are looking for a budget plan that will suit all your internet needs such as surfing, streaming, gaming, broadcasting etc. If you fail to consider this factor wisely you might end up with a bad expensive plan for 12 months because most of the ISPs come with 12 months contract.

Contracts can be annoying as they get you stuck with a service provider for almost a year. You will also have to pay extra charges if you want to eliminate the contract before the given time period.

Xfinity comes with a contract period of no less than 12 months in most of their plans. However, they also have plans that have no contract limitation such as the performance 60 plan at $39.99 per month.

On the other hand, Optimum comes with no contract in all their plans which give you the flexibility to cancel at any time without paying any extra fees for contract elimination. In this case, Optimum beats Xfinity.

Optimum has two options for premium installation that are $99 for setting up a coaxial cable, two outlets with one wireless device and another one is the $149.99 fee to hard-wire a computer, gaming device, smart TV, or an alarm system, additionally one wireless device with three outlets. There is also an extra fee of $25 in you want to set up more than three outlets.

On the contrary, Xfinity charges only $60 to $90 for installation and you can also chose manual installation if you know how to set up at $15 which is way cheaper than Optimum. So, our proud winner here is Xfinity.

According to the American Customer, Satisfaction Index Xfinity scored 70 out of 100 in 2020 with a positive change of 4.5% than the previous year 2019. In 2019, the score of Xfinity was 67 which shows that Xfinity is improving their customer service.

In 2020, Xfinity scored 3 points more than Optimum and the company is also improving its customer service to retain their loyal customers. So, the winner here is Xfinity.

Customer Reviews – What are other people saying

Customer reviews are a great way to judge any internet service provider because they genuine information about the user experience with a particular company. So you should also check out authentic customer reviews to evaluate their offerings. We have provided some highlighted customer reviews of both Xfinity and Optimum from authentic websites.

Optimum only offers five options to their customers which are listed below.

Xfinity offers a lot of data plans to their customer giving them much flexibility as well as having a suitable for almost every type of user light or heavyweight. Their main internet plans are listed below.

Pros and Cons of Xfinity and Optimum Other than Optimum and Xfinity you can also go with Cox that has almost similar prices as these two and also covers 18 states in the US. They frequently offer attractive deals which might get you to choose them.

Another close competitor can be Spectrum providing similar services with simple plans. You might choose Spectrum as they also offer double pay and triple pay bundles as well as with no contract boundary.

You can also go with this company as they provide the simplest plans for 100 Mbps, 300 Mbps and 1000 Mbps. It is one of the oldest service providers and also has earned quite a good popularity with its customers.

FAQS Regarding Xfinity and Optimum

Which router is best for Xfinity?

When buying your own, you can use the modem of TP-Link Archer CR500 as well as the Wi-Fi router combo of Amazon.

How can the internet be checked?

To check your connection speed you can go to the website of speed test by Ookla which is renowned globally. Please remember to halt other online activity during the test to get the best results.

If I change my residence address will my Optimum connection can be changed too?

Sure, you can change your service location. Optimum also gives loyalty credits for this.

By considering all variables discussed throughout this article it can be clearly stated that Xfinity comes out victorious as they give better speed, value for money, large coverage and more flexible plans than Optimum.

However, Optimum has also its unique features such as no-contract deals, no data caps etc. Xfinity also offers some plans like the fiber plans that comes with no data caps. Households in America use about 225 GB of data per month. So, Xfinity can be a better choice for you after considering all the factors above.