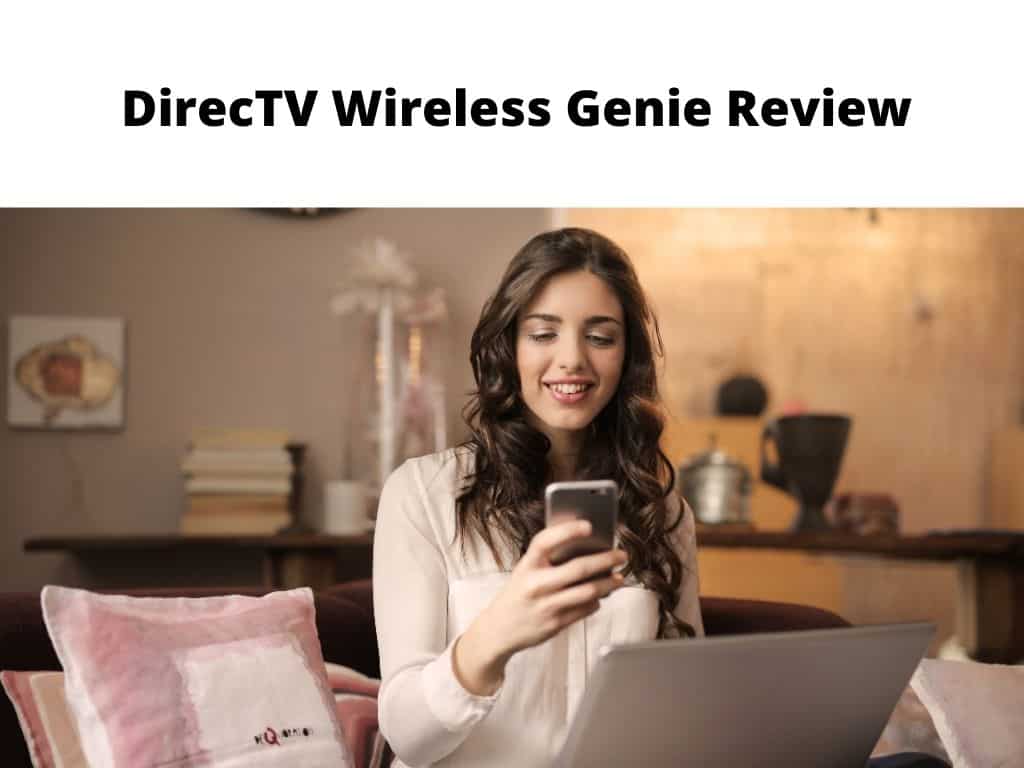 Even though phones and tablets extend the reach into daily life, a bigger TV screen remains supreme, especially when following news and sports. A typical American family, according to the statistics by a research firm, Nielsen, spends more than 8 hours watching TV every day. You might be questioning how people manage to watch TVs for up to 8 hours a day ad still manage to work, sleep, and do everything else.

One way people manage to watch TV for that long is the use of a DVR where households can watch or even record up to five programs concurrently. DirecTV Genie HD is a powerful and versatile DVR that automatically eliminates scheduling conflicts in households with more than one viewer. The device allows up to 500 hours of HD storage and add-ons that make your watching experience the best. The DirecTV Genie DVR is included on the DirecTV package. Continue reading to understand DirecTV Genie DVR better.

What is DirecTV Genie DVR?

The DirecTV Genie is a home HD-DVR that is offered by DirecTV to enable simultaneous watching and recording in our homes. The device was previously ranked on the list of top five DVRs in the industry in 2018. This was because the device is free and offers a higher capability. With DirecTV Genie, the whole family will definitely watch up to five programs at the same time. The device, unfortunately, has a 1TB storage. For an average household, this is actually more than enough. If your needs are more, you can expand the space by fitting an external hard drive.

The Genie device is capable of recording up to 800 hours of standard definition content and about 200 hours of HD content. Also, you can rewatch the recordings at any time of the day. The only challenge is that it doesn’t have any Built-in Wi-Fi. Regardless, users can stream in additional rooms if they consider buying the Genie Minis. The Genie Minis receives signals from the DVR and can record the shows everywhere in the house.

Parents can equally control what their children are watching with the Parental Control settings. Users can schedule to record a single episode and the entire TV show to watch later. The DVR has must-haves, including the HDMI, USB ports, and Ethernet. The device has some standard ports, such as composite video and component video. Regardless of whether you bought a new 4K TV, the DVR works with the equipment.

If you have been thinking about getting this device, read on for additional information that will make your decision-making easier. This brief will break down each category of the device and help you make an informed decision.

It has HD receiver, which makes it easy for the device to support up to eight rooms with the same unit. But, the Genie can only provide a signal to four TVs at a time. So, even if you can include up to eight TVs as part of the system, you have to settle with four at a time. You can get the Genie in both HR44 and HR54 models. The only difference between the two of them is the power of the satellite dish. The HR54 has a built-in SWiM power inserter, while the other model has an external SWiM inserter, which powers the satellite dish.

The price for the Genie varies from one location to the other and according to the package you choose from the company. That said, it’s affordable and most people can actually afford it.

To connect the Genie, you have to follow a very simple process. Follow the steps to connect the DirecTV Genie HD DVR to the TV;

Connect the DirecTV Genie to the main TV. After this, power the TV using the remote control and connect the HDMI cable to the Genie HD DVR and the main TV. Lastly, set the TV to the input being used.

Connect the DVR to other TVs

While comparing DirecTV Genie with the competition, at a glance, it’s very easy to notice that this device is one of a kind. It allows up to 5 simultaneous recordings and has a storage limit of 200Hrs. Its competitors, such as Dish Hopper 3 and Cox Record 6 offer more simultaneous recording and larger storage.

However, the DirecTV genie cost is included in the AT&T service. The Dish Hopper 3 will cost you $10 every month, while the Cox Record 6 costs $19.99 every month. The closest competitor to DirecTV Genie is the Xfinity X1 device. Keep in mind, the Xfinity X1 device only offers 500GB of storage limit and 100 hours of HD storage. Though the cost for the Xfinity device is $5 per month, and this is certainly what the budgeters are looking for.

This DVR lags behind its competitors in terms of storage capacity. The two models only have around 1TB of storage. The HR44 and HR54 can only record 200 hours of HD content.

This means that you will be required to delete old recordings more often. Comparing the HR44 and HR54 with the DISH Hopper 3 2TB of storage, you will realize that the Hopper 3 is double the Genie’s capacity. Well, if DirecTV can get the models off the ground, it can reach the capacity of Hopper 3.

This device is more than just ordinary hardware, but the recordings and storage are average. You can either decide to live with these average features or choose any of its competitors, as explained above. The DirecTV app works perfectly well with the Genie. Using the app, you can initiate recordings in your Home or check custom settings.

Connect the entire Home with a Single DVR

With the Genie’s New RVU-Enabled technology, you can turn every TV in your Home into a HD DVR hub. You can play, record, pause, and delete programs. It’s actually the Genie’s flagship feature. The device also makes setup and usage incredibly easy, especially if your house has a challenging setup. With that said, Hopper 3 has more advanced features.

Genie lets you record up to five shows simultaneously, thanks to the RVU syncing. All the content can actually be recorded in HD. This means that you can record content for every TV. But remember that only the primary TV has the main Genie Box, and the rest of the devices will be controlled using a remote.

The device also offers you 1TB of the hard drive where you can store your series and single shows. The Hopper 3 is way better for the people that seek to record a plethora of movies and TV shows. The maximum number of concurrent recordings with Hopper is 16, unlike 5 with the Genie. The Hopper 3 also features 2TB of Hard Drive space.

Genie offers more options when you want to personally record shows and Movies. The device recommends new and upcoming shows according to your viewing preferences.

Additionally, it pre-records the shows if you want to track them later. The users can equally initiate the Genie to record the entire series if they want more of the content. Genie was actually the first to introduce the pre-recording feature. Unfortunately, this feature is only limited to the top four networks such as CBS, ABC, NBC and Fox.

This is another potentially helpful feature that this device offers. In case you get to your show late, and you forgot to record it in advance, the device gives you the last option to start the program over again. Comparing to Hopper 3, this feature is uniquely on Genie series, and no other DVR helps you record this way.

Skip Commercials 30 seconds at a time

Most DVRs feature paid commercials. The truth is many of the users don’t like the commercials because they tend to affect the watching experience. The Genie model helps you skip commercials with a single click on the remote each time. But you will only push the commercial forward by just 30 seconds.

On the other hand, Hopper 3 Device has an auto hop feature. After turning this icon on, the device will skip every commercial for you. This is actually a major win for Hopper 3 over Genie DVR. As a matter of fact, some marketers are moving to the court to sue DISH for skipping their commercials.

Dish has also made major strides in the same perspective. A recent update was the inclusion of full integration of Netflix into Hopper’s menu. With that said, Genie wins in this category for providing a very interactive program guide.

DirecTV offers select shows and sports all in 4K Ultra HD. Currently, this is the highest quality available. When it comes to video quality, DirecTV is the best you can find. However, Dish and Xfinity also provide 4K compatibility features, but they usually don’t have dedicated 4K channels. The DirecTV app works perfectly fine, which gives users the best watching experience.

How does the DirecTV wireless genie work?

It can work at a maximum radius of 800 feet and at the same time, five interior walls between the C41W Wireless Genie Mini Client and Wireless Video Bridge, according to the information available on the website.

Is the DirecTV Genie Worth it?

Genie was ranked in 2018 as one of the top five DVRs. The main benefit is that every DirecTV plan comes with an included Genie DVR for free.

Does DirecTV wireless Genie use Wi-Fi?

It doesn’t use your Home’s Wi-Fi. Instead, it uses a special Wi-Fi network that is designed specifically for that purpose. The Wi-Fi works differently from normal Wi-Fi. It uses the MIMO technology to make it strong.

The DirecTV Genie DVR works perfectly fine and gets the job done. The main benefit is that you will not have to pay anything for the service. It can record up to 5 channels simultaneously and users can watch for more than 200 hours.

However, Dish TV Hopper 3 proves to be a better-paid alternative for serious streamers and TV viewers. The Hopper 3 can stream up to 16 contents at once and offers up to 2TB of storage. All in all, you are allowed to choose what works best for you.