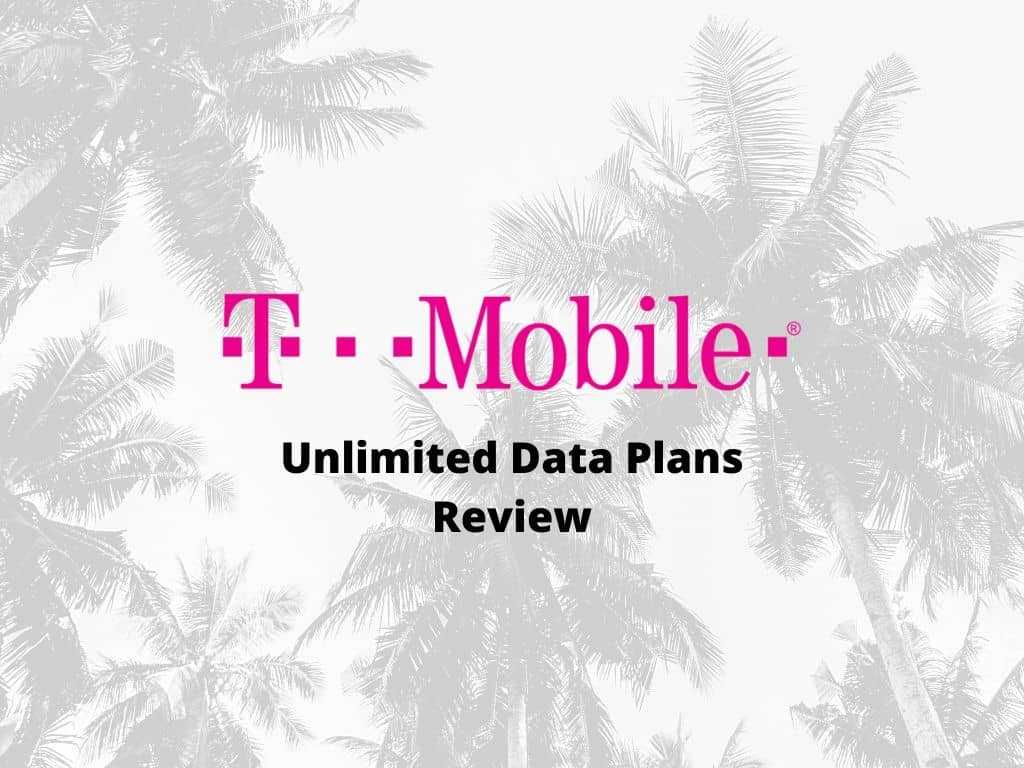 T-Mobile has opened up a lot of cool unlimited data to its customers. In recent times, the network has launched a series of new data plans that will replace the already existing one, having already expanded its network capacity to allow faster speeds. These have remained the leading unlimited data plan for a while now. The T-Mobile new Magenta plan replaces the T-Mobile One plan while the Magenta Plus replaces the One Plus.

Aside from the name, generally, everything seems to remain the same because they’ve to strike off some smaller pay-as-you-go plans in addition to its prepaid plans as well. These new actives plans are mostly built around unlimited data plans. Fortunately, T-Mobile’s existing options are usually easy to comprehend because these plans are affordable.

When compared with other network carriers, others seem to show a price that excludes fees and taxes and even includes unexpected charges, which directly alters the amount you’re expected to pay every month. But T-Mobile avoids such practices because, in their plans, any price you see as you subscribe is eventually what you’ll be charged. So if you’re in need of an unlimited data plan, you can easily subscribe to, sit tight because, in this article, we’ve got all the information covered.

T-Mobile offers a variety of data plans you can easily select from, and it turns out some have better deals than others. Below is the breaking down of the different plans offered by T-Mobile. I’ll be evaluating their prices, features, and discounts and letting you know which plans are more suitable for you and which ones to avoid.

At the moment T-Mobile has the following unlimited data plans;

It’s essential you’re aware that each of these plans falls into either a postpaid plan or a prepaid plan. The two significant variances between the two plans are; the network priority you receive and the exact time pay for your service.

With T-Mobile’s postpaid plans, you can pay at your own pace. This can include any time during active or inactive months. The postpaid plans also come with the highest network priority. This implies that customers on postpaid plans have more opportunity of getting faster data speeds in congested areas than prepaid plans operating in the same locality.

With T-Mobile’s prepaid plans, you can pay for services upfront, and you’ve a slightly lower network priority than T-Mobile’s postpaid customers. Again, this likely means you’ll have slower network speeds in certain areas when the network is heavily congested, I’m sure a few people must have noticed this scenario.

Now that the difference between the two types of plans has been made clear let’s break down the available options.

If you require less of any extras but just want to ensure you’re not out of data, you can go with the essential unlimited option. The T-Mobile Essentials Plan is a cell phone plan meant for individuals or families and offered by T-Mobile. This one costs $60/month with Autopay. You’ll get unlimited data, but during network congestion, T-Mobile may slow your data speed. Furthermore, when you exhaust 50GB in a month, it may hinder your internet speed but might even be worse during any congestion. Aside from these, your mobile hotspot will still operate at a 3G speed, which can easily stream video at high DVD quality. Talk, text, and 2G data are all available in Canada and Mexico as well.

This plan comprises of an unlimited mobile hotspot at 3G speeds. 10GB of 4G LTE hotspot per month available for $10/month.

This plan is excellent for families but can be used by an individual as well. Each line on this plan is entitled to unlimited talk, text, and data.

Unlimited Data in Mexico and Canada

This plan offers unlimited 2G data in Mexico and Canada.

Texting around the World

This plan offers unlimited texting in over 200 countries around the world at no additional charge. Calls are about 25 cents/minute.

Do you prefer to pay less monthly? T-Mobile’s Essentials plan costs $60 a month with Autopay. But you won’t get as many travel perks as free texting and an hour of WiFi on Gogo-enabled flights or the capability to use your data plan when traveling in around. More significantly, T-Mobile has the right to slow down data speeds for Essentials subscribers during network congestion.

Originally, T-Mobile’s unlimited plan was referred to as T-Mobile One but has been rebranded to T-Mobile Magenta. It maintains most of the same perks as the previous plan, with a few changes, and the Cost is $70/month. The magenta unlimited plan is the best unlimited data plan each month.

This is the most premium unlimited data plan at $85/month. Luckily, just like the regular Magenta plan, taxes and fees are also included. T-Mobile Magenta Plus plan is for those that required some extra aside everything the main Magenta plan provides.

All Taxes and Fees Included

T-Mobile Magenta Plus pricing now includes Fees and Taxes. The price you see is what you’ll be charged.

Texting, Data, and Calling Coverage around the World

At no additional charge, this offers unlimited data and texting in over 200 countries around the world. Calls are around 25 cents/minute.

This is where T-Mobile stamps its authority. T-Mobile network averages a download speed of 21.1 Mbps, which means you can expect your apps, Instagram stories, and everything else to load more quickly.

When compared with other competitors, Sprint averages a lowly 13.9 Mbps and AT&T averages a stable 17.8 Mbps. So as you can see, the T-Mobile network pulls way ahead in the data speeds category, and that makes a lot of difference when you’re doing anything on your device.

T-Mobile owns its network and equipment, which typically means that you’re going to get the best speeds, customer service, and possibly a bunch of extras you won’t find with other competitors. Also, it’s less expensive than other prepaid options. T-Mobile is probably our favorite unlimited data plan carrier, thanks to a great mix of value and features.

Like internet speed, knowing how much data you need depends on your household or business size and frequent internet activities. Starting a technology startup will require high data caps. Providers like T-Mobile high-Speed Internet offer plans with unlimited data with select plans. It will serve you well even if you need even more data, T-Mobile data plans are worth it.

WHICH AMONG THE T-MOBILE PLANS IS RIGHT FOR YOU?

Despite being the most economical, T-Mobile Essentials is worth it for most people, but just that the added taxes and fees will likely make it almost as expensive as the T-Mobile Magenta. So if you’re buoyant enough, why not upgrade to Magenta for the added features. I think T-Mobile Magenta strikes the perfect balance between features, price, and benefits. Plus, you can get this plan for as low as $32 per line with the family discount. Taxes & fees included.

With the taxes and fees included, the basic Magenta plan at $70 per month is the best plan for the single average user. Why not pay $70 per month as a flat fee and get the little extra perks of Magenta over Essentials?

These unlimited plans are ideal for people who are data hogs. On the other hand, if you solely rely on your phone plan for internet access because you don’t have an internet at home, the unlimited plan is also a great choice for small families, and a bit on the high side for individuals, just that the lot of perks in this plan makes it worth it.

T-Mobile offers some amazing extras for frequent travelers, including in-flight WiFi and international texting and data. If you’re a regular traveler especially on a plane, T-Mobile’s unlimited plans will go a long way to enable you get comfortable despite in any upright position you might find yourself. Magenta and Magenta Plus plans include taxes and fees in the price. What you see is what you’ll pay for. Also, regardless of which unlimited data plan you opt for at T-Mobile, you’ll have access to T-Mobile’s 5G network, provided you’ve got a 5G-capable phone.

What is the best T-Mobile phone plan for families?

The best T-Mobile phone plan for families is undoubtedly the carrier’s Magenta family plan. Four lines of unlimited major carrier data for $140 is a good deal, mainly since this price includes all taxes and fees. Also included are Netflix subscriptions for all, a 3GB high-speed mobile hotspot data allowance, Mexico and Canada talk/text/5GB data, and unlimited international data in 210+ other countries.

Can I bring my own phone, device, or phone number to T-Mobile?

You can bring your phone to T-Mobile—they run on the Global System for Mobile (GSM) network, making things a little easier. Just like diverting your existing phone number, you can keep your current phone or device if it’s unlocked. Once you make your purchase, just give T-Mobile a call, and they’ll assist you in making the transfer.

Still, we recommend checking your phone’s compatibility before you fully commit. You can do this by checking out T-Mobile Bring-Your-Own-Phone Policy

Also, you can bring your existing phone number when you switch to T-Mobile. First, you need to check if your phone has the ability to make the transfer. When that has been ascertained, next is to follow the on-screen instructions. In a situation where your phone number is non-transferable, it simply means that T-Mobile has no existing transfer agreement with your current service provider.

What does my device have to do with coverage?

Device capabilities are different because older devices weren’t manufactured to take advantage of the network available now. For instance, if your device is not 5G enabled, you won’t be able to tap into T-Mobile nationwide 5G network. For more information, check out the T-Mobile Coverage Map to see the type of coverage you can expect where you reside and work.