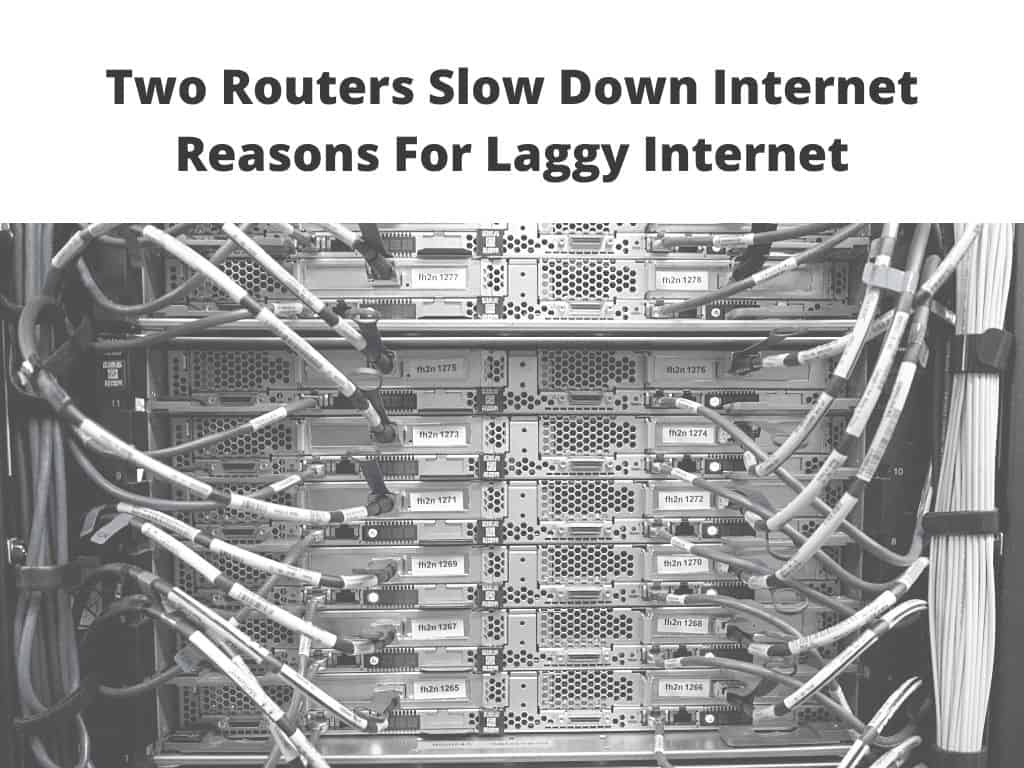 Does Having Two Routers Slow Down Internet – Reasons For Laggy Internet

At a time like this, when the internet is essential, people are more determined to increase their internet speeds and connect as many devices to the modem as possible. This is probably why many want to know whether having two routers can slow down their internet. Before we even get to answer this question, I want us all to sail in the same boat. In many instances, people confuse modems, routers, and Wi-Fi extenders. So, let’s take time to understand what we’re talking about in this brief.

In this brief, we want to find out the details on whether having two routers will impact on the speed of your Internet connection and its stability.

Will two routers affect the speed of the internet?

When you connect a router to a modem, you get faster internet activity. Adding another router at the Ethernet side of the gateway router will get you an Ethernet speed. This is a clear indication that using two routers will not slow your Internet download and upload speeds. If it does, then there is definitely a high possibility of a problem with the router, the cable, wireless network, or the number of users.

Can the placement of the two routers interfere with signals?

Yes, where the router is placed in the house can significantly impact the wireless signal. If you’re using Satellite Internet, it will affect the overall Internet speeds in the house. The fact is signals get distorted when they hit walls and buildings. In most cases, routers transmit signals at 2.4Ghz and 5Ghz. The latter is faster and provides stable and better connectivity. However, a thick wall or barrier can slow the frequency further.

What reduces the speed of internet when using two routers?

The number of users

One major reason why people opt for more than one router is to increase the number of connected devices. As we all know, as the number increases, the internet speed and reliability is impacted significantly. This is mainly because all the devices are getting the signals, sharing, and sending information all at the same time. Therefore, make an effort to manage the number of simultaneous users.

Use of Wi-Fi extenders

I have already defined what a Wi-Fi extender is. It’s a device that connects to the power socket and uses the existing signals to increase internet access in another corner of the house. These are important, but there are situations where the devices increase Wi-Fi interference and make the situation worse for the user.

Hundreds of other network channels surround the router. The frequency bandwidth might be less on all the channels, a reason why Wi-Fi channels can get congested. The imperative thing to do is to consider changing the number of channels for a better connectivity experience. You can as well consider modern routers that pick only the best connections.

Issues with the router and other devices

The devices you’re connecting to the wired connection can be sources of poor network connection in the house. If the added router has internal issues, it’s likely that the connection will not be strong and stable.

Internet packages use a domain name known as DNS. This is what translates the Physical IP of the server. Using such technologies makes the internet slow. For that reason, it’s essential to change the DNS setting.

Very few people are aware that microwaves and other devices can interfere with the wired internet. In case these devices are working and you’re using the internet at the same time, there’s a likelihood that the internet will be slower than expected.

Adding a second router can improve data flow if the connections were initially slow. But be sure it won’t help if the overall internet service is slow. Other times people usually use two routers to increase the range of Wi-Fi signals.

Is it bad to have two routers?

Two routers are not likely to cause any problem in the system. But there are chances that two routers in the same channels can cause slower performance. This means that it’s wise to put these routers at least six feet apart to reduce the chances of overlap.

Can you run two routers off 1 Modem?

Yes, and it allows you to do many things. Some choose to use two routers off one modem to increase the number of computers at the business, while others want to set up two or more wireless networks. So, it’s up to you to determine the reasons why you need two routers.

How do I connect and have 2 separate networks with 1 modem and 2 routers?

I would pick a simple 5-port and run it off of the modem directly. The two routers can now be added off the switch. Each of these routers should be plugged into the WAN port. The key reason for doing this is to make these two routers utterly independent of each other.

Using more than one router will not significantly affect the download and upload speeds of your internet. But as we’ve seen above, few things can affect the signal strength, reliability, and speeds. It’s up to you to detect the problem and solve it from the root cause. The second router should be strong and in good working conditions too for stable connections.

PrevPreviousHow To Connect PS4 to Xfinity WiFi – 7 Step Guide
NextDifference between Bluetooth and WiFi – Which Connection is Better For Internet?Next
Facebook Twitter